FAAC had during its meeting on Tuesday, October 13, approved the recommendation of the National Economic Council (NEC) to share $2 billion from the foreign Excess Crude Proceeds Account.

The three tiers of government had also in August 2009 shared $2.1 billion from the excess crude proceeds account and when added to the current $2 billion, it represents two per cent of the entire Gross Domestic Product (GDP) of the country.

The Minister of State for Finance and FAAC Chairman, Mr. Remi Babalola, who confirmed this development to journalists, on Sunday, in Abuja, disclosed that the CBN also, gave N350.721 billion to the federal, state and local governments, last week Friday.

The amount is their share of the statutory allocation of the value added tax and budget augmentation for the month of September 2009. The minister explained that the payment of the $2 billion and revenue allocations from the Federation Account was the Federal Government’s immediate efforts to re-energise the economy.

“By implication, the current challenges of illiquidity and credit crunch in the system are being addressed by this injection. It also means that funds are available for ongoing capital projects at the federal, state and local government levels.”

Babalola had, in March 2008, moved the FAAC meeting from the third week of every month to the second week in order to address the problems of delay in the remittance of the revenue approved by the committee to the accounts of the three tiers of government.

The Federal Government, according to the minister, received the lion share of the distributed excess crude of $841.911 million while the 36 states got $799.648 million. The 774 local government councils accounted for the balance of $358.440 million of the excess crude. 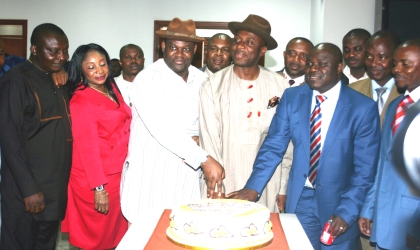