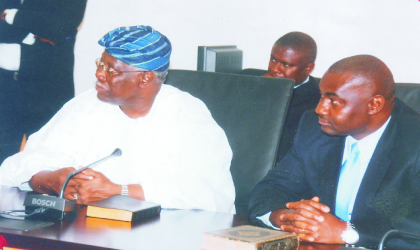 Barely 24 hours after President Umaru Yar’Adua met with leaders of Niger Delta militants at the Presidential Villa, Abuja for a post amnesty deal that would chart a new course for the region, the issue of resource control has reverberated with Ikemba Nnewi, Dim Chukwuemeka Odumegwu- Ojukwu canvanssing support for it.

Speaking at the 2009 Nigeria Liquified Natural Gas (NLNG) Prize for Science and Literature Award night Saturday in Abuja, Dim Ojukwu said the problem in the Niger Delta region arose because the people  were not allowed control of their resources and that  lasting peace in the area depends on the people controlling  their resources. Ojukwu could not understand the politics surrounding oil in Nigeria wherein host communities are neither allowed control of their God-given resources nor adequately rewarded, in terms of compensation in the course of environmental pollution and hazards they suffered from oil exploration and exploitation.

He could not also understand the reason for amnesty, when according to him, the nation is not at war, maintaining that amnesty shouldn’t have been necessary if the people of the Niger Delta have been allowed ownership of their resources.

“What are we doing with amnesty? We are not at war, yet every newspaper talks of amnesty”, he quipped, stressing that the federal government should do the right thing, by allowing the people control of their resources.

Ojukwu identified the problem of Nigeria as injustice occasioned by greed, warning that except it is redressed now, the nation shall be the worse for it.

The former Biafran warlord was full of praises for the NLNG for instituting   the award which he described as celebration of our cooperation in the field of science and literature by which the NLNG has established special place for itself in the comity of nations.

Ojukwu appealed to the awardees not to consider the monetary worth of the prizes but its impact, adding let’s feel in our heart the glow of achievements that fellow Nigerians got to the height of his careers.

Meanwhile, Igbos who are agitating for the state of Biafra under the aegis of Movement for Actualization of the Sovereign State of Biafra (MASSOB) may now have a re-think and dump their agitation for good.

This is because the architect of Biafra and ex-Biafrain warlord, Dim Chukwuemeka Odumengwu-Ojukwu has subtly dissociated himself fron any agitation that is targeted at breaking-up the country while openly opting for a united Nigeria.

Ojukwu, Ikemba Nnewi, counselled his kinsmen from the South East geopolitical zone, most of which are pro-Biafra, and Nigerians from other tribes to embrace Nigeria with their spirit, soul and body, and work towards her greatness rather than causing disintegration.

Presenting a keynote address at the 2009 Nigerian Liquefied Gas (NLNG) Grand Award in science and literature, Saturday night in Abuja, Ojukwu said in the past, there were reasons justifying ethnic agitations but such reasons have since become a thing of the past and there was no justification whatsoever to hold on to ethnic sentiments against the Nigerian state , any more.

“ Nigerian has been close to crisis but never consumed in crises, ladies and gentlemen, Emeka Odumegwu Ojukwu is here before you representing Nigeria, my being Nigerian makes me permanently grateful to God for being a Nigerian,”  he said.

For those Nigerians who may still see him as Biafran warlord and anti Nigeria, Ojukwu said ‘ I love Nigeria and I want people to live, feeling that because I love Nigeria, they are my friends: whether they are from the North, West or East.

To convince them that he is truly a Nigerian at heart, Ojukwu said I am a Nigerian in the three major languages Hausa, Yoruba and Igbo and won applause from a section of the audience.

For Nigeria not to disintegrate into ethnic cauldron, the Ikemba Nnewi identified the problem of Nigeria as greed.

‘Greed is responsible for the problem all over the world. The problem arises from one man wanting to take  what belongs to another. I call for cooperation among us , Nigerians cooperation should be the keynote. A lot depends on co-operation and how successful you are in co-operating”, he said.

For Nigerians from the six geopolitical zone who are disenchanted with the system, Ojukwu advised that ‘ your future lies I co-operation with other Nigerians, be true to your neighbour; once you do that you have an easy life ahead of you”.

Dim Ojukwu further advised Nigerians to work hard and not to depend on juju or short-cut for success because it does n’t work that way. Ojukwu, a retired Colonel in the Nigerian army was leader of the rebel Biafran side in the over three years Nigerian Civil War that was won by Nigerian troops led by former Head of State, General Yakubu Gowon