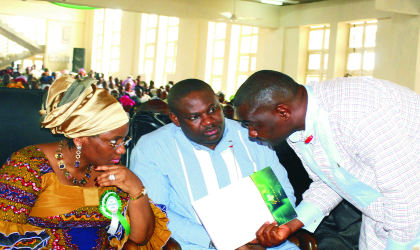 The Permanent Secretary, Ministry of Environment, Barrister Rufus Godwin who  dropped the hint yesterday warned members of the public to be alert over unwholesome frozen fish presently in circulation in the state.

Barrister Godwins said officials of the Health and Public Safety department of the ministry discovered a fish truck at Eliozu in Obio/Akpor Local Government Area disposing the  said contaminated fish to some unsuspecting members of the public in the early hours of yesterday.

The permanent secretary who addressed newsmen in Port Harcourt disclosed that the said truck with registration number XA169 URU was also selling to another truck in large quantity at one of the refuse dumps in the area when officials of the ministry swooped on them.

According to Barrister Godwins, the said truck was arrested while the driver and sellers of the contaminated fish took to their heels abandoning the truck.

The truck which is presently parked at the state secretariat contained some quantity of the rotten fish when he conducted newsmen round the area.

He expressed fear that large quantity of the fish has already been disposed to innocent members of the public before it was intercepted by the ministry officials.

Meanwhile, two fish trading companies located in Trans-Amadi have been sealed in connection with the sale of the said contaminated fish.

The companies had the trade mark on the cartons of the contaminated fish and the permanent secretary warned the operators of the companies not to operate or sell any fish to the public pending the outcome of investigation.

Our correspondent who was in the ministry’s team of inspectors reports that when they got to the premises of Stallion Nigeria Limited situated along Rivoc Road, contaminated fish littered the premises and had a strong stench thus confirming the suspicious that the fish were rotten.

Meanwhile seven persons including two Indians have been arrested.

The seven suspects who were presently detained in Trans-Amadi assaulted the team of inspectors which led to the invitation of the police.

Attempt by men of Trans-Amadi Police station to arrest three others was frustrated as the company locked up the gate  until the divisional police officer arrived the scene and ordered his men to scale through the locked gate and arrest the seven suspects.

The three suspects who are now at large include the Community Liaison Officer (CLO) of Stallion Nigerian Limited , Mr Wobo who ran away with the other two suspects when police entered the premises.

Barrister Godwins vowed that government would prosecute the suspects in court today.