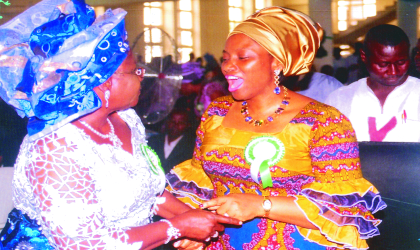 As the nation marks 49th Independence Anniversary, the Rivers State Governor, Rt. Hon. Chibuike Rotimi Amaechi has called on Nigerians, especially youths of the Niger Delta, to shun acts that threaten the unity of the country.

Governor Amaechi made the call yesterday while speaking during an interdenominational church service to mark this year’s Independence anniversary at Saint Paul’s Cathedral, Diobu, Port Harcourt.

Represented by the Deputy Governor, Engr. Tele Ikuru, the Governor noted that the country is passing through some difficulties but expressed the hope that there would be light at the end of the tunnel.

“I know that Nigeria is going through difficulties but you can be sure that we shall get out of it”, the governor said, noting that government was making conscious effort to reduce criminality in the country.

He explained that the amnesty offer to militants in the Niger Delta by President Umaru Musa Yar’Adua was a clear indication of government’s commitment to reducing criminality.

Governor Amaechi recalled the traumatic experience people went through in the state between 2002 and 2007 as a result of activities of militants and urged those who are yet to embrace the federal government amnesty to see it as an opportunity to turn a new leaf.

The Governor used the forum to renew his appeal to university lecturers, especially those with the State University of Science and Technology, Port Harcourt, to go back to the classroom in the interest of the nation to avoid what befell the country’s educational system in the 90s that led to some youth turning to criminal activities.

Also Speaking, the wife of the Rivers State Governor Dame Judith Amaechi, who returned to the country recently, thanked Rivers people for their prayerful support and to God for her miraculous healing from the multiple fracture she sustained recently from a domestic accident.

In his sermon, venerable Emmanuel Oko-Jaja said as Nigeria celebrates her 49th anniversary of nationhood, citizens of the country should turn to God for intervention so as to bring about positive changes.

Venerable Oko-Jaja, remarked that Nigerians should have a rethink because the problems of the nation was not caused by one person but that all Nigerian’s share in the blame, advocating that leaders must identify with the problems that affect the people.

He noted that Nigeria, as the giant of Africa, lacks basic infrastructural facilities like electricity and described the on-going Federal Government and the Academic Staff Union of Universities (ASUU) impasse as unnecessary, adding that quick restoration would save the educational system in the country.

The service, which was attended by government functionaries, traditional rulers and captains of industries, featured prayers for the nation, the state, legislative arm, judiciary and security agencies among others.