Nobel laureate, Prof. Wole Soyinka has said that the restiveness in the Niger Delta needs a holistic approach for it to be solved.

Soyinka said that the declaration of amnesty and financial reward alone cannot solve the agitation of the Movement for the Emancipation of the Niger Delta (MEND).

He stated that what MEND has been struggling for is the restructuring of the nation to attain true federalism.

According to him, the aims of MEND and PRONACO are the same.

“The aims of MEND and PRONACO are the same, only the methodology differs,” Soyinka said.

He further stated that the Yar’Adua government and that of his predecessor, Obasanjo have missed opportunities to resolve issues in the Niger Delta.

The literary icon said what Nigeria needs at the moment is not rebranding but a total mending.

“If you have a rickety vehicle, and you repaint it and put new slogan on it, the engine will still knock. You’ve got to mend the vehicle. You have to retool the inner workings.

Trying to put lipstick on a pig’s mouth does not make it to become Miss Nigeria. What we need to do is to mend and not to rebrand.”

Soyinka berated those who tried to label the recent bombing of the Atlas Cove jetty as an ethnic assault. Such comment, he said, are capable of causing other kinds of conflagration than the physical one that engulfed the Atlas Cove.

“I take exception to the belief that it is an action by one ethnic group against another or a group against an ethnic group. Those who call themselves elders or perceived to be elders should be more guarded in their comments. It is a very dangerous piece of language. It appeals to psychopaths and those who are naturally prone to violence.”

Soyinka, however, urged MEND to flush the deviants among them.

He commended Lagos State Governor, Babatunde Raji Fashola, who he said did not regard the attack on Atlas Cove as an assault against the Yoruba.

He said Fashola only spoke as the chief security officer of the state.

Soyinka urged the state government to come to the aid of the relations of those who lost their lives in the Atlas Cove attack. 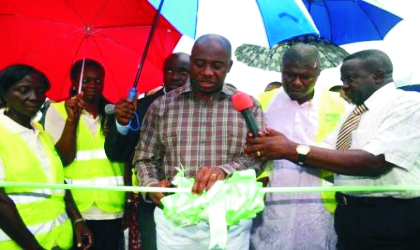