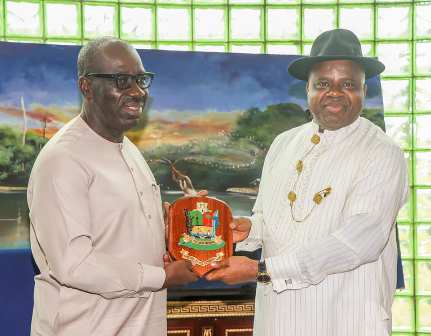 Elebele Community of the Ogbia Council area of Bayelsa State,has declared its total support for the Peoples Democrat Party (PDP), and all of the party’s candidates in the forthcoming 2023 general elections.
Speaking with The Tide in the community during a tour of ongoing selected government awarded projects in parts of the state, the Community Development Committee (CDC) Chairman, Elebele Community, Mr ThankGod Ogoroki, commended the Bayelsa State governor, Douye Diri for the ongoing reconstruction of the failed bridge in the community.
The Tide reports that a steel bridge constructed by the SPDC in Elebele, one of its host communities in the Ogbia Council area of Bayelsa State collapse sometime early 2018, necessitating calls for reconstruction with initial efforts and pressure put by the community and sympathisers proofing abortive, while succour and relief came the way of the community upon the assumption into office of the prosperity government headed by Governor Douye Diri.
The Elebele CDC helmsman restated the community’s resolve to guarantee the state governor and the Peoples Democratic Party (PDP), 100 percent votes in the 2023 elections.
Ogoroki added that the governor’s passion for the development of the state is evident in his sterling performance even though the state, he noted had to grapple with meagre allocations since the governor’s assumption of office about two years ago.
He emphasised the ongoing reconstruction of the collapsed bridge was almost 90 percent completed, saying that the community which serves as a commercial hub would regain its social and economic relevance.
“We thank the prosperity Governor of Bayelsa State for keeping to his promises of reconstructing the collapsed bridge. As you know, I believed you knew that when this bridge collapsed a few years ago that it paralysed the economic activities of this community and also impacted negatively on the economic activities of most communities in the Eastern senatorial districts of the state linked by this bridge now under reconstruction, courtesy of governor Diri.
“We complained and pleaded with various bodies, NGOs, NDDC and even the federal government, but none showed up.
“As we speak today, this bridge which links three LGAs of the state is seriously under reconstruction, and I can inform you categorically that the bridge is almost 90 percent completed. By next week, from information available to the community from the company, it would be completed, waiting commissioning by the governor in February”, the CDC said.
“For, we as a community, believe that to whom much is given much is expected, so come 2023, all our votes are for PDP and governor Diri if he so wishes to continue. Because for the Elebele people, we know that Governor Diri has shown commitment to the development of our community and the entire state in just about the two years that he has been in the saddle of the state’s ship as governor”, the community added.