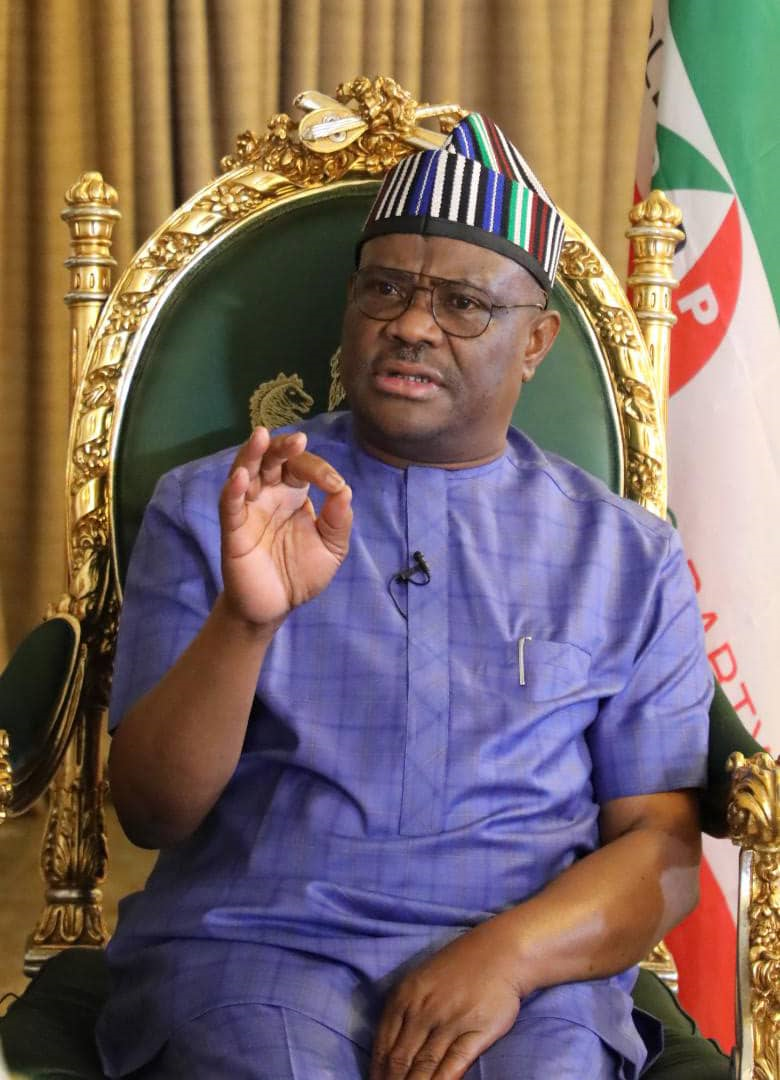 Rivers State Governor, Chief Nyesom Wike, has charged residents of the state to be vigilant and to report any suspicious movement to the security agencies for immediate actions.
Governor Wike gave the charge during an emergency State Security Council meeting held last Saturday, at Government House Port Harcourt, following the attacks on police personnel in parts of the state last week.
Governor  Wike who condemned the wicked acts , stated that no amount of cruel resort to barbaric attacks would make the state succumb to secessionist agenda.
Governor  Wike also called on traditional rulers and Council Chairmen in the state to end the habit of administering their people from Port Harcourt, the state capital,  but rather relocate to their respective localities.
The governor who gave the charge during a solidarity visit to him at the Government House, last Tuesday by the traditional rulers, political and opinion leaders of Ekpeye nationality, explained that by residing at their locations of jurisdictions, they would be able to monitor activities properly and take appropriate actions.
The governor further reminded those with secessionist agenda to  look elsewhere, stressing that the Rivers State remains an autonomous entity that cannot be annexed.
He assured that his administration would leave no stone unturned in protecting the state against such incursion.
He disclosed that as part of measures to stamp out criminality in Ahoada West and Ahoada East Local Government Areas, the state government had placed a bounty on two notorious gang leaders, VIP and Comasi .
The leader of the delegation, Prof.  Dulu Appah, had expressed gratitude to the governor for the numerous developmental projects sited in the area.
He said: “ Indeed, for us the people of Ekpeye ethnic nation , we  make bold to say without fear of contradiction that the democratic dividends we have enjoyed during your administration has made us the envy of other ethnic  groups in the state”.
Another major event last week in Brick House was the approval for the award of contracts for  the ninth flyover project in the state  as well as  the construction of Sir Dr Peter Odili Cancer and Cardiovascular Diagnostic and Treatment Center.
The State Executive Council in a meeting presided over by Governor  Nyesom Wike, also approved contract for the dualisation of of the first phase of Ahoada-Omoku road and  the construction of Omerelu internal roads.
The State Commissioner for Health, Prof Princewill Chike who addressed newsmen after the meeting  last Wednesday, explained that the Sir Peter Odili Cancer and Cardiovascular Diagnostic and Treatment Center would cost the state the sum of N25.9 billion and the job would be handled by Julius Berger Nigeria Limited. He said that the project would be sited at Rumuokwuta, in Obio/Akpor Local Government Area of the state.
According to the Commissioner for Works, Elloka Tasie-Amadi, who also addressed newsmen after the meeting, the ninth flyover would be sited at Rumuepirikom in Obio/ Akpor Local Government Area.
The flyover project would also  be handled by Julius Berger at the cost of N6.6 billion. The job would be delivered in 12 months. Within the week under review, Rotary Club of Port Harcourt conferred on  Governor Wike the “ 2019/2020 Good Governance Award”.
Vice President of the club, Rotarian Obiageli Ejezie who led the  delegation to Government House Port Harcourt, said the honour was in recognition of Governor Wike’s outstanding achievement in project execution in the state.
Also last week, the Rivers State Chief Executive hosted the South-South Zonal Working Committee of the People’s Democratic Party (PDP) .
PDP National Vice Chairman, South-South, Chief Dan Orbih, who led the delegation said they came to thank the Governor for hosting the last  Zonal Congress of the party where they were elected.
By: Chris Oluoh
Related Topics:
Up Next