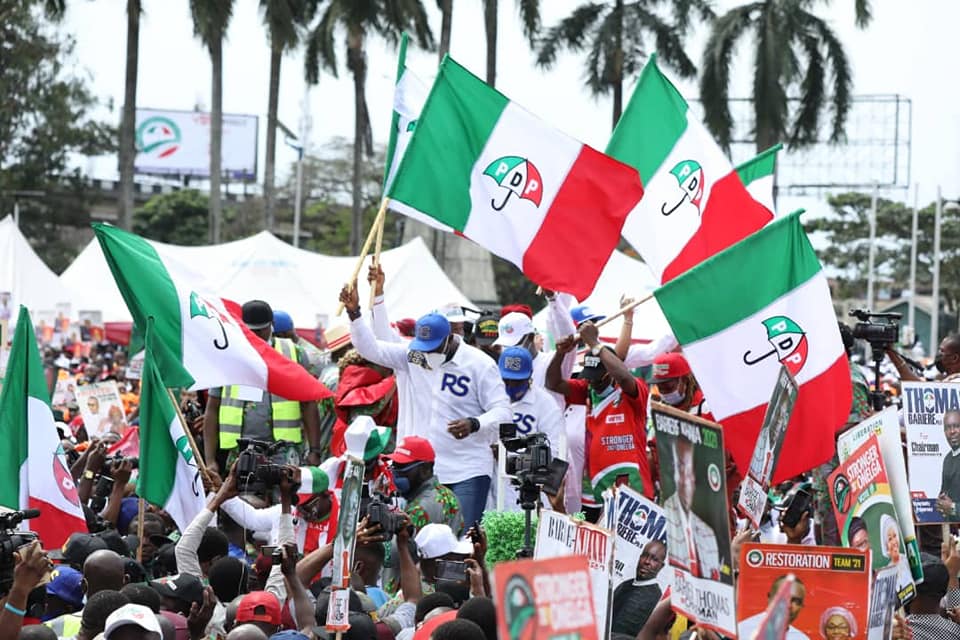 The Peoples Democratic Party (PDP) says it is optimistic of winning the November 6 Anambra governorship election.
PDP National Publicity Secretary, Kola Ologbondiyan, said this in a statement by Assistant Director (Head of Unit), Publicity Department, PDP, Richard Ihediwa.
Ologbondiyan, playing host to a coalition of Anambra youths under the aegis of Anambra Youth Initiative For Good Governance, in Abuja, said the “PDP presents the hope for the state to rebuild and realise its full potentials”.
He said that the victory of the PDP in the recent Abia National Assembly by-election was a signal that the South East was for PDP.
According to him, the assemblage of leading aspirants and the surge of the people to the PDP, clearly indicate their resolve to elect the next governor of the state on the platform of the PDP.
“The reality of the direction the November 6 governorship election in Anambra will take is already manifest.
“Ndi Anambra are very industrious, resourceful and inventive people and they have collectively realized that they can only achieve their full potentials on the platform of the PDP.
“This is particularly given our robust manifesto and wealth creation principles of inclusiveness, transparency, accountability, massive infrastructural development and empowerment of the people.
“Across our nation today, it is only PDP governors that are commissioning legacy projects,” he said.
According to him,  projects upon projects are being commissioned by the party on daily basis in line with its manifesto in different states of the federation.
He said that the states included Rivers, Bauchi, Sokoto, Bayelsa, Akwa-Ibom, Benue, Abia, Adamawa, Edo, Oyo, Cross River, Zamfara, Enugu, Taraba and Delta States.
Ologbondiyan added that PDP states were opening new development and investment frontiers in critical sectors, including agriculture, aviation, energy, power, healthcare, education, real estate manufacturing and massive industrialisation.
“This is why Ndi Anambra have firmly resolved to rally on our platform to revamp and move their state towards realizing its full potentials in all spheres of life,” Ologbondiyan stated.
Speaking during the visit, the National Convener of the Coalition, Mr Okechukwu Umeh, restated the confidence of the people of Anambra in the PDP.
Umeh added that all hands were already on deck to ensure the victory of the PDP in the November election.

LG Autonomy Not For NASS To Address – Gbajabiamila