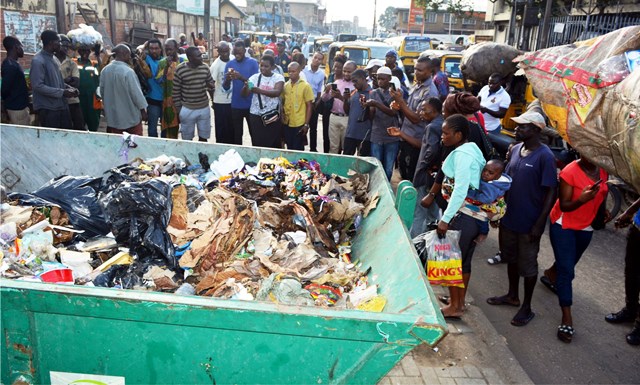 Since the beginning of time, people have always devised a way of disposing their trash. It is imperative to note that proper waste disposal is important to ensure safety of life and avoid possible health hazards.
Indiscriminate waste disposal is an improper way or manner by which individuals and organizations get rid of their trash. These practices include dumping refuse by the roadside, along streets, on major roads, as well as in the various rivers.
Solid waste generation has greatly improved to an uncontrollable rate in the society, this happens due to daily human activities.
Due to inadequate waste disposal methods, dumping of refuse in unauthorized places is now the order of the day. Overpopulation, industrial revolution and urbanization have become major causes of waste generation as well as improper waste disposal.
Lack of appropriate storage facilities, unavailability of proper waste management and planning,wrong perception by residents and nonchalant attitude toward the environment cleaning and sanitation, is also a cause of this indiscriminate waste disposal.
The problem of indiscriminate waste disposal has brought so much pain and ills to the environment and society at large. We can point to the outbreak of various epidemics, infectious diseases, and other human environmental degradation such as flooding, drainage obstruction and waterway blockages in most parts of our county like Lagos, Port Harcourt, Aba, etc. It has been noted that heaps of trash are virtually in all market areas, on the streets and even by the roadside; and these wastes remain there for many weeks without devising any means of waste collection either by private individuals or the government. Some areas have also been abandoned when inspections are going on by the government, or even during environmental sanitation. I assume such attitude is an act of negligence on the part of waste disposal agencies or the ministry of environment.
Waste management and indiscriminate waste disposal and checkmating of the activities of persons who dispose waste products in an improper way, must be done from the grass root level. It is a joint effort from both the government an citizens of the nation and this must start from the house hold and family.
Government should focus on collection of waste products from households. They should encourage homes and individuals to bag their waste in plastic bags as this would help to avoid littering.
Most people drop biscuit sachets, cans, bottles and water sachets by the roadside while driving in cars, and on highways; that is why the government should move faster to ensure a cleaner and healthier environment.
There should be adequate financing for each state to support and help them in waste disposal projects. Waste bins must be placed in strategic areas on the streets and in communities for effective garbage collection.
Illiteracy and low level of education is another factor that can constrain the thinking of most citizens. For instance, in places such like GRA, Victoria Island, and other known places where the supposed educated elite reside, and do daily business, the activities of inadequate waste disposal or improper refuse dumping is barely seen or is at the lowest because they know the dangers of the act and how dirty their environment can be. But in the places where the average or low class citizens live, littering is higher. Therefore, proper sensitization and advocacy programmes should be carried out to educate the general public on why they should desist from dumping waste indiscriminately.
The government should also encourage individuals who set up private waste collection agencies by reducing taxes paid also workers of the ministry of environment. Those who take part in cleaning these waste from the roadside from time to time, should be encouraged by increasing their take home pay. This would enable them see the work as a responsibility and thereby curb nonchalance.
Laws and sanctions should be made and enforced to discourage persons who engage in indiscriminate waste disposal. Persons could be arrested and prosecuted by a court if they flout orders. Fines can also be imposed depending on the magnitude of default by anyone who is caught.
Apart from all these measures, government should also encourage practice such as recycling of industrial waste products such as cans, bottles, papers, clothes, etc. Also, biowaste products which include those materials that can degrade such as food items, leaves, banana peels should be biologically turned into manure and fertilizers.
This is why the government should set up recycling agencies and also monitor the collection of this waste to avoid improper disposal.
Unlawful solid waste dumping in the society must be stopped or, at least, checkmated. There is an urgent need for government and private stakeholders to implement policies to prevent the littering of waste in the environment. Human health and the environment need to be safe guarded from unsustainable conditions which are caused by indiscriminate waste disposal in our society.
Government alone should not be left with the responsibility of checking indiscriminate waste disposal. Also it is the duty of every organization and individual to take it upon themselves to keep the environment healthy and clean.
Dennar wrote from Port Harcourt.

On 21st December, 2021, President Muhammadu Buhari alarmingly declined assent to the long-awaited Electoral Act Amendment Bill through a letter to the President of the Senate, Dr Ahmad Lawan, and Speaker of the House of Representatives, Femi Gbajabiamila. From the tone of the memo, Buhari exuberantly, largely aligned with the Act amendments except the clauses that provided for mandatory direct primaries for all political parties.
Discernibly, the president amid the rebuff acknowledged the energies, nonetheless urged the lawmakers to review the objected clauses, and also requested it be transmitted back for his assent after review. Least expected, Buhari’s major critic, Dr Samuel Ortom, Benue State governor, overtly backed the president’s decline of assent over the direct primaries.
Irrepressibly, the president’s action has continued to generate controversies in the polity with the civil society organizations (CSOs) threatening fire and brimstone and many public commentators seething over perceived mischief and insensitivity. On the whole, three categories of thoughts exist.
Whilst one backs the president against mandatory direct primaries, the second group; mostly from opposition parties, endorsed it. Then, the third category which includes Chief Nyesom Wike, Rivers State governor, admitted the flaws but argued that the assent ought to have been given, notwithstanding the defects, for a review later as Buhari handled the Petroleum Industry Bill (now PIA).
This idea isn’t bad. However, the big question is; what will be the fate if after giving assent, the anticipated review hits the brick wall? It must be carefully noted that the Electoral Act, if flawed, can set the polity ablaze unlike the PIB due to vast interests.
In the legislative zone, the experience is not different. While some accepted the development in good faith and progressively prepared for a critical review, the other side seemingly insisted on a supremacy battle to override the president’s veto. However, the leadership of the two chambers so far, astutely arrested the situation, and opted for wider consultations. Be that as it may, Section 59(4) of the 1999 Constitution, Federal Republic of Nigeria as amended provides a window to override the president by the National Assembly where he withholds assent to a bill presented to him after 30 days.
Buhari’s divergence is the clause for mandatory direct primaries for political parties citing the financial implications on the Independent National Electoral Commission (INEC) to monitor primary elections across all the wards. There are 8,809 wards in the federation. Buhari also argued that political parties must be given a free hand to determine how to elect their flagbearers within their strength, and also, that security factor must be put into consideration underlining that security agencies could be overstretched in ensuring hitch-free primaries which may overheat the polity.
Ostensibly, many frowned at Buhari’s objection — having vetoed the Bill earlier in 2018 ahead of the 2019 General Elections principally on grounds of wrong timing. In fact, a lawmaker while reacting on Channels Television fumed that a bill, overwhelmingly passed by the two chambers after legislative processes which he participated in was ‘insensitively’ rejected by the president; just one man. Logically, his concern was an ego thing, widely far from objectivity. Incidentally, that’s the rule of the game – democracy.
Besides, the oversight of the lawmakers is glaring as the reasons adduced by the president against adopting mandatory direct primary are compelling.
Possibly, the lawmakers didn’t look at it broadmindedly. For instance, if signed into law, it will require INEC to seek a larger budget on logistics and allowances to monitor primary elections across the 8,809 wards in the country for each political party to validly choose a presidential candidate. Let’s say 20 political parties plan to field presidential candidates respectively, it will require INEC’s workforce to go round all the wards for each of the registered political parties to ably elect a valid candidate which has a heavy financial implication. To conduct the 2023 General Elections alone, INEC demands a whopping N305 billion from the treasury.
Sensibly, for INEC to monitor the primaries of all the political parties across all the wards in the country, the task could push the commission’s budget up to many trillions of naira. Then, where there are security challenges that discourage public gatherings, people must notwithstanding embrace direct primaries at the risk of their lives or end up in an inconclusive primary election. In other words, failure to conduct direct primaries across all the wards may deny a political party an opportunity to field a valid candidate in any election.
Deductively, these arguments strongly suggest that mandatory direct primaries could spontaneously force smaller political parties into extinction due to financial constraints and also create unmanageable logistics and security crises.
Another strong fear is beating the time frame for primaries by political parties. As known, primary elections follow INEC’s timetable, and it is rare to find any political party that produced its candidate without internal squabbles which, most times, resulted in late primary election leaving members to resort to any possible means; direct, indirect or consensus to be able to field a candidate within time. If the law should exclusively endorse mandatory direct primaries, practically, it will lead to inconclusive primaries in virtually all political parties. Government is a team work and that’s the strong reason laws must pass through the two arms – Executive and Legislature.
In fact, the bureaucracy for INEC to mobilise workforce alone including ad-hoc staff, managerially allocate tasks can frustrate many political parties due to time. It will also put a heavier burden on the Judiciary to entertain frivolous lawsuits from wards where direct primary perchance didn’t hold by circumstances beyond the control of political parties.
Thus, primary elections should logically, remain flexible and at the discretion of political parties. To be emphatic, the financial implications on the treasury, overstretching security agencies, operability to political parties and also, overstraining the Judiciary are cogent reasons to reconsider the Bill in overriding public interest.

Shape Of Things To Come