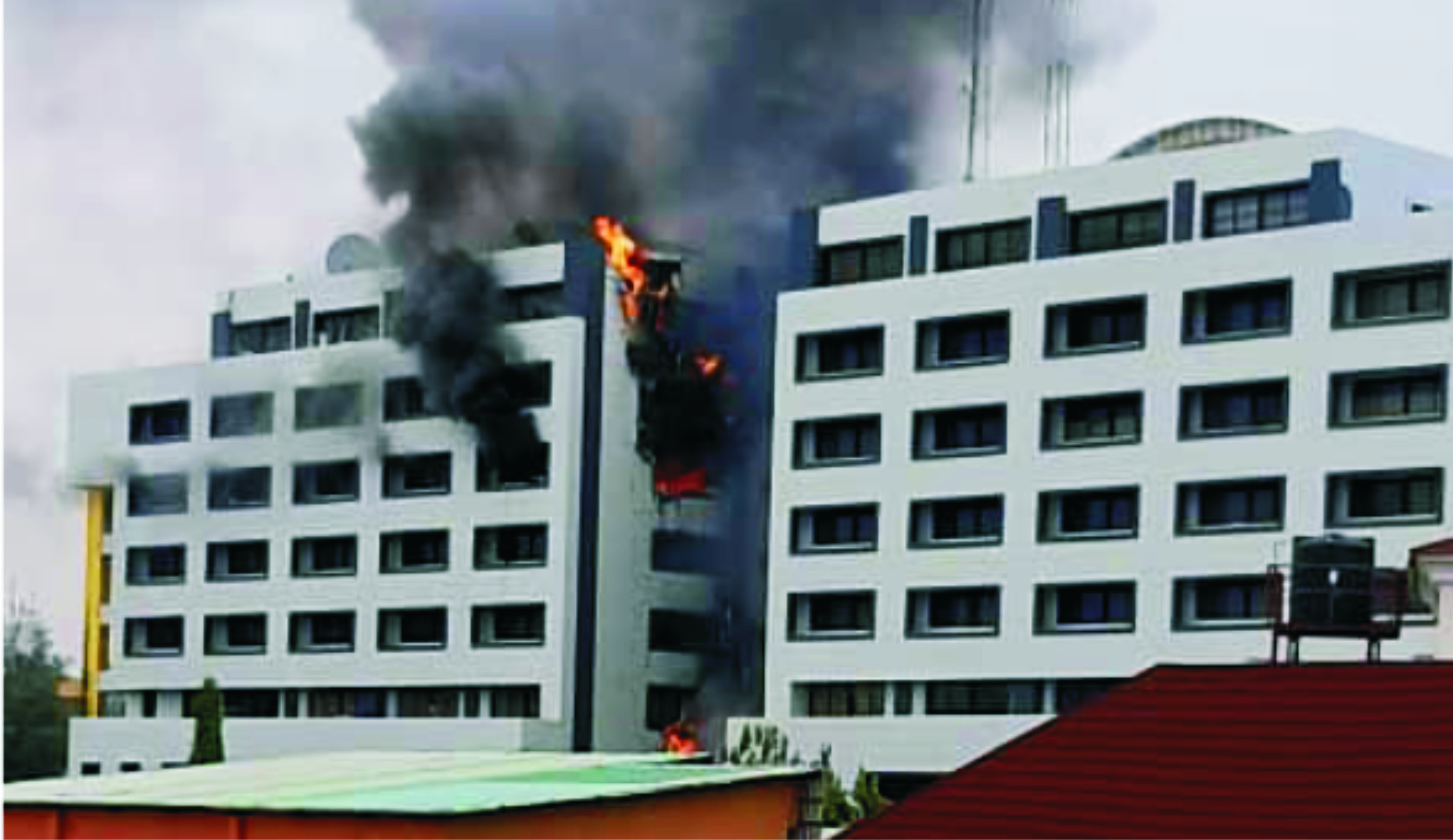 The Office of the Accountant-General of the Federation, popularly known as “Treasury House” was, yesterday, ravaged by fire which affected the last three floors of the sprawling building. Consequently, the Federal Fire Service (FFS) has announced a probe of the incident, a routine that is often conducted in the aftermath of fire incidents in the country.
Spokesperson of the FFS, Ugo Huan, in a text message to our correspondent, said the investigation was to ascertain the cause of the inferno.
“Fire at the Accountant General’s Office Abuja has been extinguished and investigation will commence immediately to ascertain the cause”, she said.
While the cause of the fire was not immediately known as workers are currently at home observing the sit-at-home order of the Federal Government, it was gathered that a handful of the workers especially at the Integrated Payroll and Personnel Information System (IPPIS) who had to work on salaries of federal workers were mostly still going to the office.
It took a combined team of men of the Federal and FCT Fire Services to bring the fire under control.
Investigations show, however, that there is an ongoing massive rehabilitation work at the premises, a development which has led to the tampering of electrical and other fittings in the complex.
“There is an ongoing work within the complex. The workers normally work day and night and there have been debates about the sources of funding for the rehabilitation.
“The workers on the site had earlier tampered with so many things especially electrical fittings and so without prejudice to what the Fire Service would come up with later, one can assume that the fire may have been caused by an electrical malfunction,” said a security source who was among the first responders when the incident occurred.
The cause of the fire, which started about 10 am, is yet to be known.
It was gathered that as soon as the incident started, men of the Federal Fire Service were alerted to assist in putting out the fire.
They were later joined by officials of the National Emergency Management Agency, the Nigeria Police Force and the Abuja Environmental Protection Board.
The FCT Police Commissioner, Bala Ciroma, who briefed newsmen at the scene of the incident, said an investigation into the cause of the fire had commenced.
He advised motorists to use alternative routes into the area, noting that the Ladoke Akintola Boulevard would be cordoned off during the investigation into the cause of the fire.
Ciroma, who disclosed that parts of the building had been damaged by the incident, said the fire was successfully put out without casualties.
However, the Federal Fire Service put out the fire that gutted the top floors of the Office of the Accountant General of the Federation (Treasury House) Central District Area of the Federal Capital Territory, FCT, Abuja.
The AGF building is located beside the FCT Police Command and the Nigeria Security Printing and Minting Company (NSPMC).
The Fire Federal Service, which was about some 300 metres to the building, according to eye witness account, were able to mobilize their equipment and personnel into the area and brought the situation under control.
The immediate cause of the fire incident could not be ascertained as workers and staff of the Treasury House were observing the restriction order imposed by the government to curtail the spread of Coronavirus in the FCT.
An eye witness said the fire started from the third floor, razing the building upwards before the personnel of the Federal Fire Service came to the rescue.
The Public Relations Officer of the FFS, Sandra Ugo, told journalists that personnel of the FFS arrived on time and were able to put out the fire before much damage was done to the building.
“We have successfully extinguished the fire outbreak at the AGF office,” she said.
Ugo declined to comment on what could have ignited the fire but noted that the good thing is that the incident had been put under control in less than one hour.
Meanwhile, the Peoples Democratic Party (PDP) has demanded a full-scale investigation into the circumstances surrounding the mysterious fire outbreak in critical offices at the Headquarters of the Office of the Accountant-General of the Federation in Abuja, yesterday.
In a statement, the National Publicity Secretary of the People’s Democratic Party (PDP), Kola Ologbondiya, yesterday, accused the President Muhammadu Buhari-led administration of foul play and complicity in the inferno.
Ologbondiya claims the fire is not unconnected with the call for a probe into subsidy payments made by the government since 2015 when Buhari became president.
The statement reads, “The party says an investigation is imperative given apprehensions in the public space regarding the time and the offices involved in the fire outbreak.
“Our party expresses shock that the fire incident came on the heels of our heightened calls for a forensic audit into the hazy oil subsidy regime of the President Muhammadu Buhari-led administration for which trillions of naira is being claimed to have been spent.
“This is in addition to recent demands for an investigation into allegations of fraud and diversion of COVID-19 intervention funds as well as social investments program of the Buhari government since 2015.
“Already, the National Assembly, riding on the gale of demands by Nigerians and championed by the PDP, has raised queries on spending in respect of social incentives program.
“Nigerians are anxious to know those behind this wicked arson because the fire outbreak reportedly occurred on the part of the building which hosts critical offices, including the Treasury Single Account (TSA), Funds, Federation Account Allocation Committee and Revenue Department among others, relevant for the demanded financial inquests.
“Our party therefore calls for immediate investigation to determine the actual cause of the fire, as well as ensure that critical documents and data on government revenue and expenditure are immediately retrieved.
“The PDP also demands that the complex be immediately cordoned off to enable an uncompromised inquest into this ugly incident”. 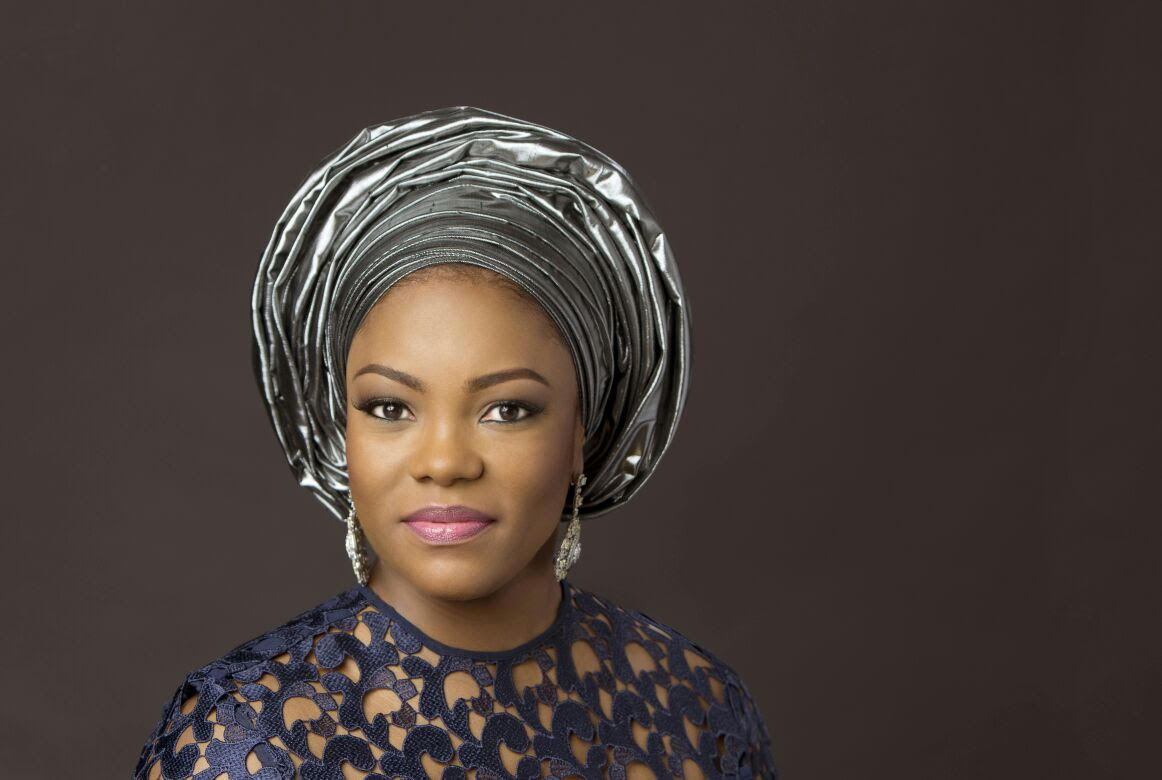