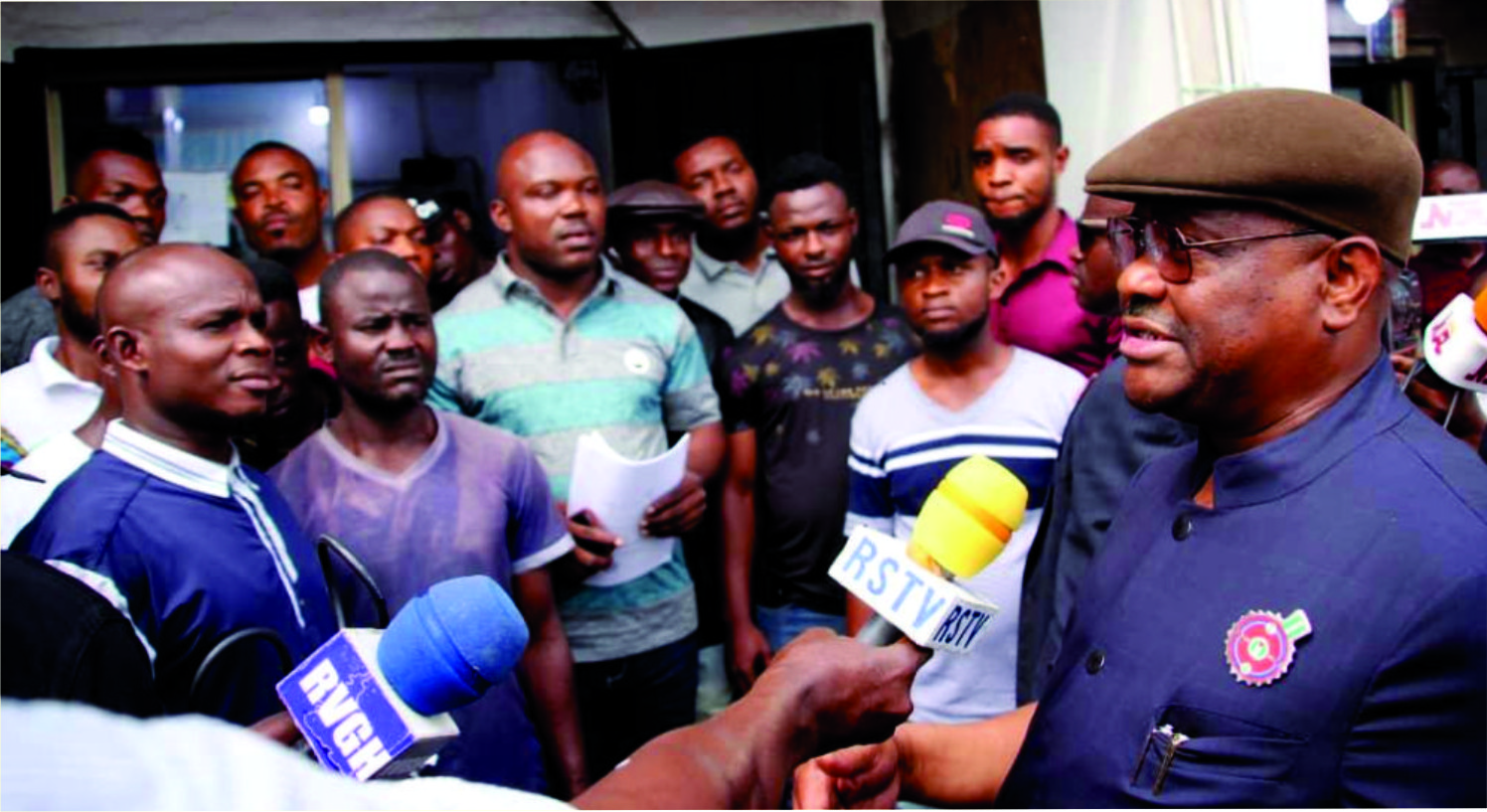 The Rivers State Governor, Chief Nyesom Wike has called on traders and residents to cooperate with the Rivers State Government to deliver the Rebisi, Rumuogba and Okoro-Nu-Odo flyover bridges on schedule.
Wike, yesterday, moved from Shop to Shop at Rebisi (Former Garrison) and Rumuogba (Former Artillery) flyover bridges sites, personally appealing to the traders and residents to vacate the buildings marked for demolition.
The governor urged the traders and residents to make sacrifices, since the flyover bridges will be in the interest of all residents of the state.
He said: “I have come to speak to them, let them appreciate our efforts better. Now times are hard, but they have to understand with us.
“I took it upon myself to personally explain to them that the time we notified them has elapsed. But I have extended it to Tuesday next week, after which demolition will start.
“I am here because I don’t want Julius Berger to have excuses. These bridges must be delivered on schedule”.
Wike said that though the exercise is painful, all residents must contribute to ensure the flyover bridges are delivered.
“I am here to personally appeal to the people because I feel their pain. But this is a sacrifice everyone must make for the state to move forward.
“To do three flyover bridges the same time is not an easy task. Therefore, we must work hard to achieve the target. The Target is that Julius Berger must hand over the three flyover bridges on February 20, 2021.
“It is about one year from now, the time will elapse and people will start saying nothing was done. We don’t want such a situation”.
Wike said that the Rivers State Government has paid compensation to the owners of the marked houses, pointing out that they were duly notified that the demolition would take place. He, however, said that he decided to visit the traders to give the entire process a human face.
Meanwhile, the Rivers State Government has moved the scheduled inauguration of the committee on Ease of Doing Business originally scheduled for today, to next Monday.
A statement signed by the state Commissioner for Information and Communications, Pastor Paulinus Nsirim, yesterday, said that the postponement was due to other pressing engagements of the state Governor, Chief Nyesom Wike.
The statement reads: “This is to inform you that the earlier scheduled inauguration of members of ‘The State Ease of Doing Business Council (EoDBC)’ by His Excellency, the Governor of Rivers State, Chief Nyesom Wike, has been postponed, due to other pressing state engagements.
“The inauguration will now hold on Monday, January 13, 2020.
“The time and venue remains the same – 11:00 am, the Executive Council Chamber of Government House, Port Harcourt.”
Earlier in a statement, the commissioner had indicated that the Rivers State Governor, Chief Nyesom Wike would inaugurate the members of the State Ease of Doing Business Council (EoDBC), today.
The statement had said that the event will take place at the Executive Council Chamber of Government House, Port Harcourt by 11am.
According to the statement, the council will be chaired by the state Deputy Governor, Dr Ipalibo Harry-Banigo, while the Commissioner, Ministry of Budget and Economic Planning would serve as Secretary/Coordinator.
The statement further said the chairman, or representative of the House Committee on Commerce, the chairman, or representative of the Internal Revenue Service, representative of the Central Bank of Nigeria (CBN) and the President, Rivers State chapter of the Nigeria Chamber of Commerce, as well as one other to be appointed by the governor on public interest would serve as members.
It, therefore, urged all members to be seated by 10:30am.
The statement had read, “The Rivers State Governor, Chief Nyesom Wike, will on Friday inaugurate the members of ‘The State Ease of Doing Business Council (EoDBC)’.
“Members of the Council are: Deputy Governor, Chairman, Commissioner, Ministry of Budget and Economic Planning — Secretary/co-ordinator, Commissioner, or representative of Ministry of Commerce, member, Attorney General and Commissioner or representative, Ministry of Justice, member.”
Others include are, Commissioner, or representative, Ministry of Finance, member, Chairman, or Representative, House Committee on Commerce, member, Chairman, or representative, Internal Revenue Services, member, a representative of the Central Bank, member, President, Nigeria Chamber of Commerce, (Rivers State), member, President, Nigeria Entrepreneurs and Investment Forum (Rivers State), member and one other to be appointed by the Governor on Public Interest.
“All members are expected to be at the venue by 10:30am,” the statement said.
“I am here to give this construction process a human process. You supported me, but this is for the good of the people”, he said.
Wike was accompanied by officials of the Rivers State Ministry of Works and Engineers of Julius Berger Nigeria Plc.
The governor also inspected ongoing reconstruction of major roads in the Old GRA Residential Area of Port Harcourt.
Also, the Rivers State Executive Council has approved the setting up of a Task Force to enforce the closure of illegal private schools across the state.
Addressing journalists after the First State Executive Council meeting presided over by the Rivers State Governor, Chief Nyesom Wike at the Government House, Port Harcourt, last Wednesday, the Commissioner of Information and Communications, Pastor Paulinus Nsirim said that the Task Force will ensure that only approved schools operate in the state.
He also stated that the State Executive Council set up two committees to allocate stalls at the Ogbunabali Fruit Garden Market and the Rumuwoji Market.
He said that the two Executive Council Committees have up to the end of the month to conclude the allocation of the stalls.
He said: “Government is desirous to ensure that the people of Rivers State enjoy the dividends of democracy during the second term of Governor Wike.”