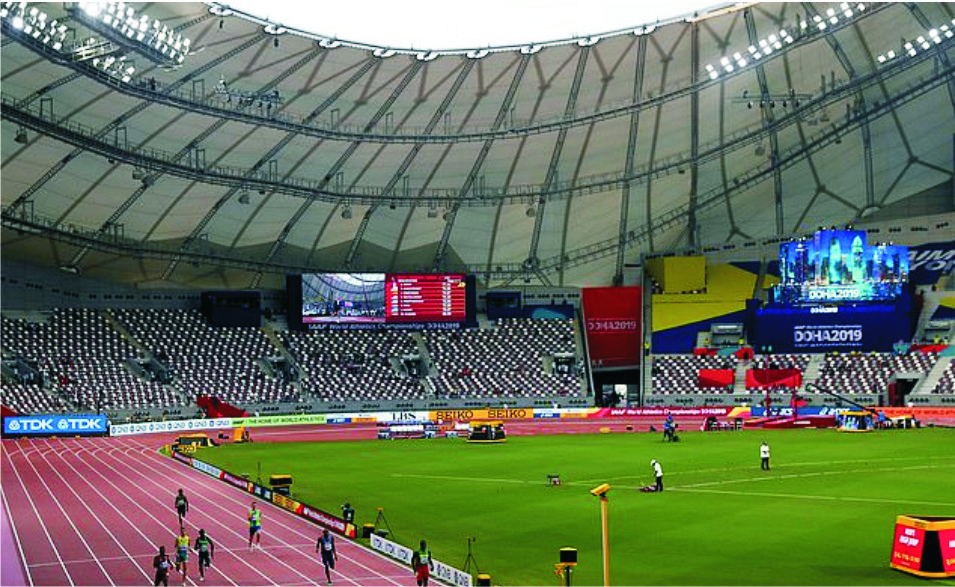 The empty stands in Doha at the World Championships are not helping athletics and the sport needs to evolve, says ex-British sprinter, Darren Campbell.
Doha was awarded the event ahead of Barcelona and Eugene in Oregon, USA, but the lack of crowds have been a feature of the first three days.
“The sport is not evolving and it does not help when images across the world show empty stadiums,” said Campbell.
“I guess people watching it go ‘that sport’s dying’ and switch over.”
France’s world champion decathlete Kevin Mayer says holding the championships in Doha is a “disaster”.
Denise Lewis, who won gold for Britain in the heptathlon at the 2000 Olympics, also says the sport’s world governing body, the IAAF, has “let athletes down”.
“What athletics needs now is for the IAAF to really think about what they are doing and, if it means the World Championships unfortunately have to go to countries that will sell out, then that’s the way it has to be,” added Campbell.
Campbell, who won 4x100m relay gold at the 2004 Olympics in Athens, also says the IAAF needs to think about how to develop the sport after failing to take advantage of former Jamaica sprinter Usain Bolt’s popularity.
“It (athletics) is getting heart resuscitation at the minute,” said Campbell.
“It’s not in the best place it has ever been and that was regardless of Usain Bolt.
“You hear people in cricket talking about, after such a fantastic World Cup [won by England], how they could harness what has been created by that moment.
“Athletics has failed to harness what has been created over the period of Usain Bolt. They just rode on his back rather than think ‘how do we take this to everybody?’.
“We want to be entertained, so how does athletics entertain? This is where they are failing.”