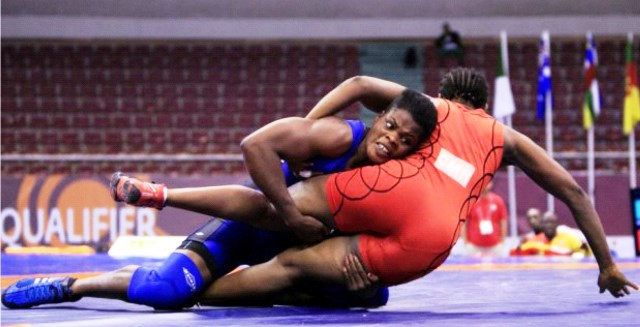 Team Nigeria won three medals, one silver and two bronze, as the wrestling event began at the 2018 Commonwealth Games in Gold Coast, Australia yesterday.
Fighting in the 76kg weight class, Blessing Onyebuchi settled for silver after she lost to Olympic Champion Erica Wiebe in the final. The Canadian secured the gold via a fall.
Onyebuchi had earlier defeated both Katouskia Pariadhaven of Mauritius and India’s Kiran, 10-0 (via technical superiority), to advance to the final.
Earlier in the day, Bose Samuel secured bronze for Team Nigeria in the women’s 53kg class, after she overcame Deepika Dilhani of Sri Lanka, 10-0 (via fall). She adds the Commonwealth Games bronze medal to the African Championship gold she won in Port Harcourt two months ago.
In the men’s event, Welson Ebikewenimo grabbed another bronze for Nigeria, his third medal at Commonwealth level. The Bayelsa born-athlete avenged his African Championship defeat to January Combrinck, over-powering the South African, 5-2 on points.
But Amos Assizecourt was unlucky as he missed out of another bronze for Nigeria in the 74kg weight category despite leading Welshman Curtis Dodge, 8-0 in the first round. Dodge eventually beat Assizecourt via a fall in the second round to clinch the bronze-the first for Wales in wrestling at the Commonwealth Games.
Action will continue in wrestling on Friday with Team Nigeria’s Commonwealth Champion Odunayo Adekuoroye (57kg), 8-time African Champion Blessing Oborududu (68kg), Amas Daniel (65kg) and Soso Tamarau (97kg) all expected to vie for medals.