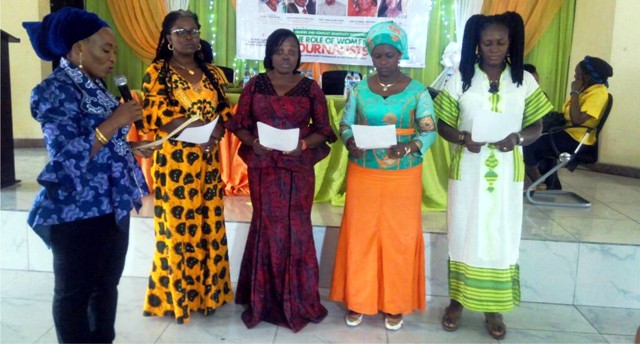 The Nigeria Association of Women Journalists (NAWOJ), Rivers State Council has ended her 6th triennial delegates conference in Port Harcourt with the election of new executive .
Those re-elected include Mrs Lilian Okonkwo-Ogabu as State Chairman, Joy Grant-Amadi, Vice Chairman while the positions of Treasurer and Auditor went to Susan Serekara-Nwikhana and Carol Ibinabo Matthew respectively. The posts of Secretary, Assistant Secretary, Financial Secretary among others were deferred for bye-election within the next two weeks for obvious reasons, as directed by the National Secretariat of the association.
In an acceptance remark, the State Chairman of NAWOJ, Lilian Okonkwo-Ogabu, pledged to build better development for the association, assuring that her re-elected leadership team will carry all members along in the programmes of the body in the state. She however, urged them to be committed to the activities of the group, so as to reposition it for growth.
Ogabu enjoined members to ensure prompt meeting attendance, regular payment of dues as at when necessary.
According to her, “I will certainly improve my administration from where I could not do well in my first tenure. I plead with all members to contribute towards building a lasting NAWOJ in the state for greater productivity”.
Meanwhile, The National President of NAWOJ, Mrs Ifeyinwa Omowole, has enjoined women journalists to be more involved in the happenings in Nigeria and help promote lasting peace, unity of purpose and enduring development through well-refined reportage of events.
Omowole who spoke at the 6th triennial delegates conference of NAWOJ in Port Harcourt last Friday, charged women journalists to be committed to the course of ensuring relative peace in the world, pointing out that, as media practitioners they should report things that are capable of promoting peace instead of violence in Nigeria.
According to her, “we should work towards restoring stability in Nigeria via  our reportage of events for blissful Nigeria”.
Omowole, however, cautioned journalists, especially the women folk to always contribute their quotas as nation-builder whenever they are opportuned to cover events of national interest, she appealed to the government to encourage journalists in every facet to enable them discharge their duties efficiently.
Mrs Omowole advised state NAWOJ executive and members, to be proactive in the discharge of their duties without fear or favour and ensure that only the truth thrives for fruitful results.
Also speaking at the occasion, the General Manager of Rivers State Newspaper Corporation, publishers of The Tide newspaper, Mr Vincent Ake, called on journalists to help foster unity, peace and development in Nigeria instead of destroying it with fake news, especially on the social media, which he described as unhealthy and unacceptable as far as media practice is concerned.

What Men Want In Relationship