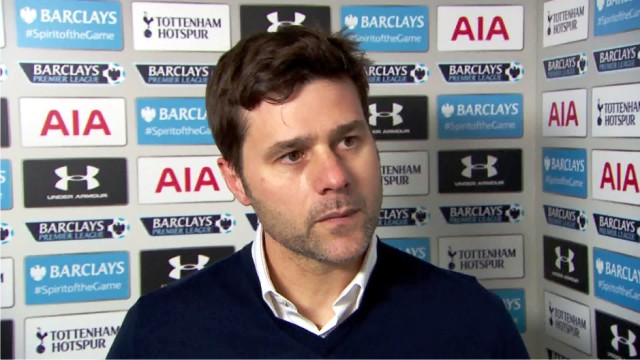 Mauricio Pochettino has issued a rallying cry to Tottenham by telling his players Chelsea can still be caught in the Premier League title race.
Antonio Conte’s men remain in charge at the Premier League summit, but their 2-1 defeat at home to struggling Crystal Palace on Saturday has injected extra life into the battle at the top.
That loss coupled with Spurs’ 2-0 win over Burnley saw the gap cut to seven points with nine matches to play.
And Pochettino is trying to maintain as much optimism as possible to keep Spurs on their toes and ready to pounce should Chelsea slip again.
“It’s crazy but that is football and everything can happen,” he told a news conference ahead of tonight’s trip to Swansea City.
“That’s a good lesson for us all. Belief is the most important thing in football. Not quality, running or being strong but belief, faith and fight.
“Nothing is impossible in football and that is our idea, our philosophy. We need to keep going in that direction and it is true the Premier League is tough to play in, and to win every game and compete. It’s so competitive.
“But can it [catch Chelsea] happen? Yes, of course, it can happen and in our mind we must be positive to try to dream and give our best.
“If we are focused only on the next game and nothing after, and if we are positive, I think we can get the three points but first of all we need to play. We need to be better than Swansea and it’s sure we will need to fight a lot against them.”
If Spurs are to successfully usurp Chelsea, they will have to do it without talented midfielder Harry Winks, who Pochettino expects to miss the rest of the season with a twisted ankle.
The 21-year-old attempted to tackle Burnley’s Stephen Ward in Saturday’s game at Turf Moor and ended up falling into the hosts’ dugout.
Further scans are due to take place to fully understand the extent of the injury, but Pochettino does not think Winks has much hope of adding to his 21 Premier League appearances before the campaign finishes.
“We hope there is no big issue,” Pochettino said. “But it is true it will be difficult for him to play again this season.
“He twisted his ankle but we need to see what happened in his ankle on the scan.”

…As LMC Gets Praises