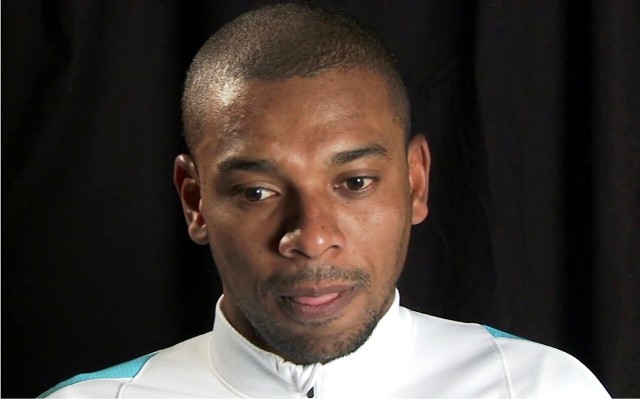 Manchester City midfielder Fernandinho believes his side can reignite their Premier League title ambitions tonight against a Chelsea team rocked by a shock 2-1 defeat against Crystal Palace.
Ten points clear following the international break, Chelsea saw their lead trimmed to seven points after they crashed at home to Palace at the weekend and second-place Tottenham Hotspur won 2-0 at Burnley.
City could not follow Spurs’ lead, drawing 2-2 at Arsenal on Sunday, but victory at Stamford Bridge will leave them eight points below Chelsea with eight games of the season remaining.
“The Premier League is still open,” Fernandinho told the City website.
“We have a tough game against Chelsea away. To be close to them, we have to win that game and we will see what will happen at the end of the season.”
Chelsea came from behind to record a clinical 3-1 victory when the teams last met at the Etihad Stadium in December.
But while Antonio Conte’s side remain overwhelming title favourites, failure to beat City would give hope to the chasing teams who have spent much of the season trailing in their wake.
Chelsea failed to avoid defeat against Palace despite boasting full-strength team and having almost 80 minutes in which to turn the game around.
However, although neutrals will be crossing their fingers for another slip-up against Pep Guardiola’s City, Conte has urged his players to think of the pressure in positive terms.
“There is big pressure, but it is normal when you are in a great club and you are very good,” the Chelsea manager told the club website.
“When you are lucky enough to fight for the title there is the pressure, but not only for us, for a lot of teams.
“Don’t forget, the other teams were candidates to win the title, but instead we stay top of the table and we try to keep this position.”
City were one of the teams expected to challenge for the title, particularly after Guardiola’s much-trumpeted appointment, but as the draw at Arsenal highlighted, they remain vulnerable in defence.
The result extended their current unbeaten run to eight league games — the longest such sequence of Guardiola’s tenure — but the last three of those matches have all been drawn.
City twice took the lead at Arsenal, only to be pegged back on both occasions, and Guardiola believes his team struggle psychologically when they have a lead to defend.
“When the team is down, we react because everything is lost and we react in a good, good way,” he told reporters at the Emirates Stadium after the stalemate against Arsenal.
“To handle a situation at 1-0 (up), we are not comfortable, not yet. But we will be better. We will improve in the future.”
With Bacary Sagna expected to miss out again due to a groin strain and Pablo Zabaleta short of fitness, Guardiola may have to decide whether to persist with Jesus Navas at right-back.
The Spanish winger looked ragged at times against Arsenal and in Chelsea’s Eden Hazard, he would be up against one of the most lethal attacking players in the division.
City received some good news on Monday when Gabriel Jesus returned to training after breaking his foot, but the Brazil starlet is not expected to be available for selection for several weeks.
Chelsea wing-back Victor Moses is a major doubt after missing the Palace game with a calf strain, which saw Pedro fill in on the right flank.
City won 3-0 on their last visit to the Bridge a year ago, with Sergio Aguero plundering a hat-trick in a game that saw Chelsea goalkeeper Thibaut Courtois sent off for upending Fernandinho.
Neither side came close to challenging champions Leicester City last season, but a similar outcome on Wednesday could have major repercussions for this season’s title race.

Go Round FC Edge Past Heartland

We Can Catch Chelsea – Tottenham