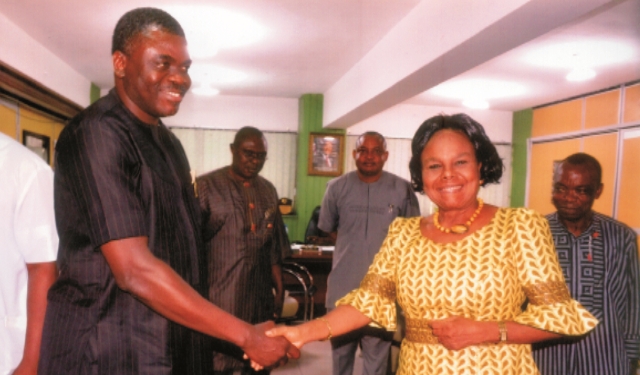 The Commissioner for
Information and Communications, Dr Austin Tam-George has commended the leadership of the Students Union Government of the Rivers State University  of Science and Technology (RSUST) for modifying their electoral process through e-voting.
Tam-George made the commendation during the e-voting project launch of the 2016 SUG election in Port Harcourt.
The commissioner, who was represented by the Director of ICT, Mr Kenneth Okujagu, lauded the initiative, saying that it will go a long way to eliminate electoral skirmishes during students union elections.
The project, which was officially launched by the Vice Chancellor of the university, Professor Blessing Chimezie Didia, would guard against rigging and strengthen the election of candidates of choice as well as encourage peaceful and transparent conduct of elections.
Speaking at the launch, Didia lauded the initiative, and assured the students that no lecturer will downgrade any student because of personal interest. He pointed out that time has come when students who gained admission into the university would graduate exactly at the preferred duration of study, and prayed that soon the university will be seen as the most peaceful institution in Nigeria.
The vice chancellor gave credit to the conduct of the students, which he said, accounted for his being retained as the VC of the institution, and enjoined them to continue to conduct themselves in a civilised manner.
Earlier, Dean, Students Affairs, Dr Zeb Obipi had expressed joy that history has been made in the university as the students will be putting into practice the e-voting to herald new leadership of choice without rancour and acrimony, noting that RSUST was the first amongst universities to launch the e-voting.
Obipi said that for the first time in the university, students have a unified data where they are allowed to vote without fear of molestation or harassment.
In her opening remarks, Acting President of the Students Union Government (SUG), Nnaa Faith Barigboto, said that out of the passion to give the students a new face, the e-voting was introduced to enable students vote candidates of their choice, as she commended the VC for his support in making their dream come true.
Barigboto encouraged the students to conduct themselves in a peaceful manner to make the e-voting a success.
Highlight of the launch was the e-voting exercise by the students. At present was the President of the RSUST Alumni Association, Dr Gladson Nwokah, among others.