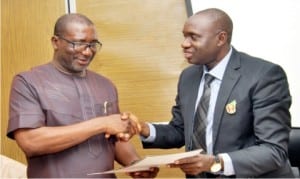 The People of Gwara
Community in Khana Local Government Area of Rivers State have urged the new management of the Niger Delta Development Commission (NDDC) to complete the Gwara Laalaa Road project awarded to Snow Integrated Service for over four years but presently abandoned.
Commenting on the state of the Gwara Laalaa road project, the Paramount Ruler of Gwara Community, HRH, Mene Macdonald Nwiyor II, told newsmen at his palace in Bien Gwara, that the poor state of the road project was causing grave difficulties to its users.
Mene Macdonald Nwiyor, Pointed out that the abandoned road project was impassable during rainy season, thus making the inhabitants of the community to suffer terribly.
The Royal father disclosed that the contractors, Snow Integrated Service only mobilised to site briefly and vacated the project site for over two years.
He called on the NDDC management to expedite action on the abandoned road project, and complete it before the next rainy season to alleviate the plight of the road users.
Mene Nwiyor also stated that the abandoned road project was the only major access road to the economic base of Gwara Community of Laalaa. According to the Royal father, the completion of the Gwara Laalaa Road project would stimulate a thriving rural economy and stem  rural urban migration, as the community members would be able to access and tap from the community’s natural resources, especially in sand scooping.
He further appealed to the NDDC management to send a special delegation to access the state of the road.
When contacted, the managing director of Snow Integrated Service, Mr. Nnamdi Udosen declined to comment on the road project.