The Nigerian movie indus
try popularly known as Nollywood and rated as the third movie industry in the world after Hollywood of America and Bollywood of India has produced a lot of talented actors and actresses since its inception.
Nigerian Nollywood has also grown rapidly between 1990 and 2000 to become the second largest producers of movies annually in forms of volumes. While some Nollywood  actors started with the Nigerian Cinema when it was still up coming, some other talented movie stars joined along the way and together have made Nollywood what it is today and the history of Nollywood will not be complete without these actors. They have stood the test of time in proving their worth in acting.
They Include:
Pete Edochie
At the number one spot is Pete Edochie who was born on 7th March 1947 in Enugu, Eastern Nigeria. Pete started his education in Zaria in the Northern part of Nigeria after which he joined Nigerian Railway Corporation (NRC).
He moved into the movie industry and has featured and starred in over 200 movies. He later joined the Eastern Nigeria Broadcasting Corporation 1967 and in 1980 trained formerly in the British Broadcasting Corporation (BBC).
His accomplishments have attracted numerous awards, national honours and hall of fame adoptions. Ever since he is still very active in the Nigerian movie scene and is no doubt the greatest Nollywood Actor ever to grace the African movie scene.
Nkem Owoh
Nkem Owoh popularly known as Osuofia following his hilarious movie is a star when it comes to acting. He was born in Enugu State, Nigeria and attended the University of Illorin and while he was a student, he started featuring in various television and film productions.
Osuofia is one of the most dynamic actors and often modifies scripts to bring out his natural acting prowess. This was demonstrated when he won the African Movie Academy Awards (AMAA) for best actor in a leading role.
Richard Mofe-Damijo (RMD)
The tales of acting in Nigeria could not be told without the mention of RMD, one of the few guys whose initials appear more popular than their full names. RMD is an actor and a politician.
He started his acting career by featuring in soap operas. He won the awards for best actor in a leading role in 2005 at the Maiden Edition of AMAA and also Commissioner for Culture and Tourism in Delta State, Nigeria.
Kanayo O. Kanayo
Anayo Modestus Onyekwere whom you will remember with the popular name Kanayo O. Kanayo was born on March 1,1962 in Mbaise, Imo State. He is so talented in acting that the history of Nollywood will not be complete without his name being mentioned.
He featured in his debut film appearance in Nollywood’s first major film “Living In Bondage” and since then, he has starred in over 100 films. In 2006, he won the Best Actor, in a leading role, at AMAA. Towards the end of 2012 he announced that he was leaving acting where he made his mark to become a full time pastor.
Ramsey Noah
Ramsey Noah is one of the renowned Nollywood Actors who was born to an Isreali Father in Edo State Nigeria on the 16th of July 1973. The handsome movie star who may be the love epitome of Nigeria, started his acting career when he first featured in a soap opera, ‘Fortunes’.
In 2010 Ramsey became the winner of AMAA’s Best Actor in a leading role in his performance in the best picture award winning film titled “THE FIGURINE”. He has recently stated that he planned to exit acting and work more on the background as a director and be more involved in humanitarian services.
Van Vicker
Born on August 1, 1977, Van Vicker is one of the most talented actors that grace Nollywood. His cute face and build cannot be mistaken on TV. He was born to a Dutch father by a Liberian-Ghanaian mother.
His background was in Radio and TV presenting. He has won the Afro-Hollywood Award for Best Actor (African Film Category). Van Vicker runs a foundation that helps young talents to be identified and given a shot at acting.
Desmond Elliot
Desmond Elliot often described himself as Pan-African because he was born to a Yoruba father by an Ibo mother. He attended Airforce Primary School and St. Johns College in Jos and eventually because a graduate of economics from University of Lagos.
Desmond is a very creative actor and has featured in more than 200 moves. He has received numerous nominations and awards in Entertainment.
Keneth Okonkwo
Keneth Okonkwo who is probably more popularly known as “Andy Okeke” from his very popular movie titled Living In Bondage’ cannot be left out in the list of popular Nollywood actors.
Keneth was born at Nsukka in Enugu State. He had a background in business and international law before he went into acting in 1992. His first movie “Living In Bondage” was a breakthrough in Nollywood acting and has since been featured in other popular movies.
Mike Ezuruonye
Mike Ezuruonye was born on 21 September, 1974 in Lagos. He attended Nnamdi Azikiwe University and subsequently went into acting. He has developed his acting skill over time right from his tender age when he was fond of writing scripts and working behind the camera. 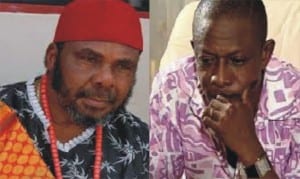