League of Gokana Community Youth Leaders has endorsed the decision of the Supreme Council of Ogoni Traditional Rulers to allow the resumption of oil exploration in Ogoniland.
The youth leader said this at the end of an extra-ordinary meeting held at the palace of the Gbenemene of Gokana in Biara.
A communiqué made available to newsmen at the end of the meeting, stressed the need for Ogonis to adopt the declaration made by the Ogoni traditional rulers during their meeting on February 2, 2015 at Korokoro, which endorsed Belema Oil to resume oil exploration in Ogoni.
The youth said that Gokana, with the largest oil wells in Ogoni, have accepted the postion of chiefs, elders, women and youth on the choice of Belema Oil.
The youth also said that no other companies or company shall be welcomed in Gokana land, stressing that all anti-Belema movement in the area would be rebuffed.
The communiqué, which was read by the Youth President of Kegbara Dere Community, Mr. Norteh Meebari Morgan, warned those peddling rumours against Belema Oil working to create division among the people to desist from it or be exposed.
“Belema Oil is a dream builder, and we, the youth have heard of the Belema story and are motivated because we believe many more Belemas will spring up in our land,” they said.
On his part, the President of the National Youth Council of Ogoni People (NYCOP), Comrade Victor Promise Wisdom, said that the youth group has resolved to engage Belema Oil, adding “lets see what he has for the youth”.
He stressed that NYCOP will be part of the decision taken at Ogoni Congresses in relation to Belema Oil in Ogoniland.
Meanwhile, the Chairman of Ogoni Solidarity Forum, Mr. Celestine Akpobari has dismissed claims by Peoples Democratic Party (PDP) that, the indigenous company (Belema Oil Company) recently seeking to resume oil exploration in Ogoniland belong to Governor Chibuike Rotimi Amaechi of Rivers State, and Senator Magnus Abe of Rivers South East Senatorial District.
Akpobari debunked the claim last Saturday in a chat with newsmen in Port Harcourt following comments by the Director of Communication of PDP Governorship Campaign Organisation in Rivers State, Barr. Emma Okah, that Belema Oil Company was owned by Governor Amaechi and Senator Magnus Abe, who have reportedly pushed for the firm to replace Shell Company oil exploration in Ogoniland in Rivers State.
Akpobari said, the oil company belongs to a Kalabari person from Kula, Akuku-Toru Local Government Area of Rivers State, and described the PDP allegation as baseless and untrue.
Akpobari urged the PDP leadership to verify their facts before going public to avoid portraying the party as deceitful.
According to him, President Goodluck Jonathan had the final say in any oil company to replace Shell, asking, is it possible that the President would wish to allocate the Ogoni oil wells to his opponent’s company, assuming that Governor Amaechi and Senator Abe owned Belema Oil Company?.
“Politicians, especially those in PDP should know that, Rivers people are not ignorant and tools, politicians should stop policising issues that have nothing to do with politics.
“Like our chief said, this man (Belema Oil) has been on negotiation with government and Ogoni people over a year now, and we have seen the good plans of the company. Politicians should stop politics of gimmick, PDP just wants to embark on campaign that does not have base and fact, even in the 21st century”, Akpobari said.
He warned politicians against using Ogoni issues to cause crisis among Ogoni people.
Also speaking, the Chairman of Kpean Council of Chiefs, Chief Nwarinee Gilbert called on political parties to desist from using Ogoni oil wells as issue of political campaign in the area.
He explained that, Belema Oil Company started plans to resume oil mining in Ogoni years ago, and that its plan was well articulated which has made the traditional rulers and youth to endorse it.
He challenged companies with better plans to come out, stating that Ogoni People were ready to work with such company.
Gilbert further disclosed that no company will operate in Ogoniland, if the environment is not cleaned up as recommended by UNEP. 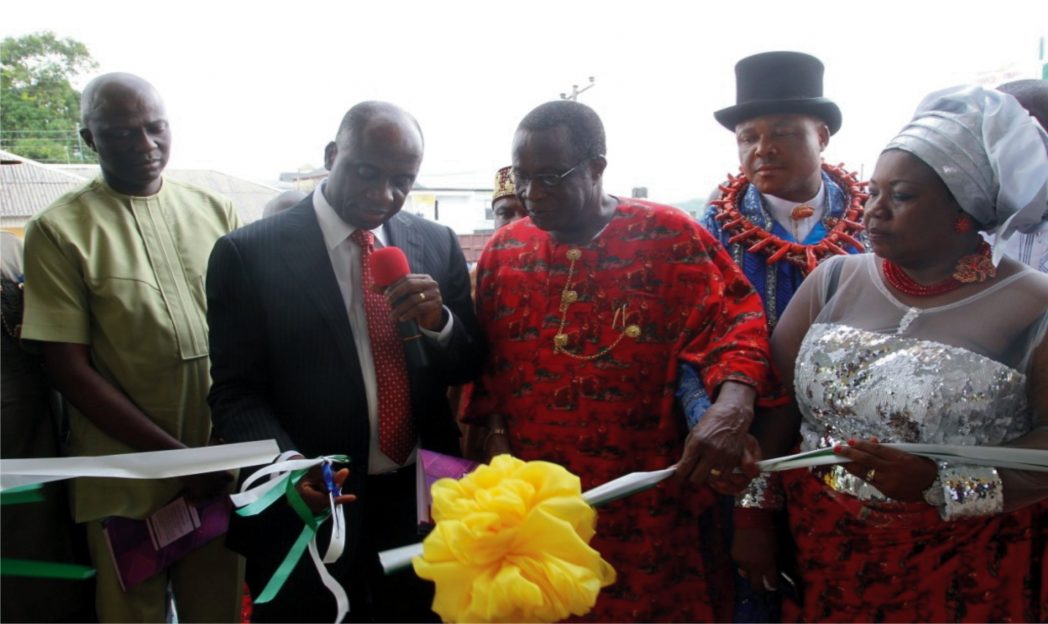