The All Progressives Congress (APC) has named Gov. Rotimi Amaechi of Rivers State, southern Nigeria, as the Director-General of the APC Presidential Campaign Organization, which will drive the party’s efforts to win the 2015 presidential election.
In a statement issued in Lagos on Thursday by its National Publicity Secretary, Alhaji Lai Mohammed, the party said the announcement followed the hugely successful convention at which its presidential candidate, Gen. Muhammadu Buhari, was democratically elected, and the follow-up successful choice of his running mate, Prof. Yemi Osinbajo, SAN.
It said Gov. Amaechi’s outstanding reputation as a man of courage, principle, strength of character, decency and love of country, as well as his administrative prowess and organizational skills combined to fetch him perhaps the most important task in the quest for positive change in Nigeria.
APC thanked Nigerians for their support and prayers toward the success of the convention, the emergence of Gen. Buhari as the APC presidential candidate and the choice of Prof. Osinbajo as his running mate.
The party said it believed it had lived up to its promise to Nigerians to ensure that the choice of its presidential running mate would be made within the context of the best democratic ideals, considering the enormously-positive reactions from the general public to the choice of Prof. Osinbajo.
APC said whether in the academic, legal or ecclesiastical world, Prof. Osinbajo stands much taller than his physical frame, and serves as a good accompaniment to our presidential candidate, himself a man of such rare sterling qualities that have stood the test of time, qualities that are now so sorely lacking in our country’s leadership.
“Our presidential running mate is an award-winning professor of law, a legal luminary, a gentleman, a much-sought-after public speaker, a tested administrator, an author and a man of great ecclesiastical standing. Educated in Nigeria and the UK, Prof. Osinbajo is a Barrister and Solicitor of the Supreme Court of Nigeria, who has served in many organizations and professional bodies in Nigeria, West Africa, Africa and the United Nations.
He has authored or edited over a dozen publications, has taught and practised law at the highest levels, and has served on the Editorial Boards of learned publications and non-legal publications, in addition to publishing many articles in learned journals.
“Now that we have presented Nigerians with the best possible choices for the exalted positions of President and Vice President, we expect that citizens, who have been yearning for quality leadership, will use their voting power to put Nigeria firmly on the path of greatness. A country seeking to be among the greats in the comity of nations cannot afford to have a mediocre leadership,” the party said.
Meanwhile, The Lagos State chapter of the All Progressives Congress says the combination of Maj.Gen Muhammadu Buhari (retd.) and a former Attorney General of Lagos State, Prof. Yemi Osinbajo (SAN), will inspire a social change in the country, especially in the area of fighting corruption should they win next year’s presidential election.
The APC in a statement by its publicity secretary, Mr. Joe Igbokwe, said the two men had impressive track records that would endear them to Nigerians.
The statement read in part, “The change train that will end the harrowing Peoples Democratic Party reign of corruption and ineptitude is now complete. It charges all Nigerians to work to ensure that the 2015 elections herald the needed change Nigerians have been yearning for by rallying round the Buhari/Osinbajo ticket.
“Prof. Osinbajo is a deep intellectual, a revered Christian pastor, a revered professor of law, a redoubtable lawyer and a technocrat who compliments the stellar records of General Buhari.” 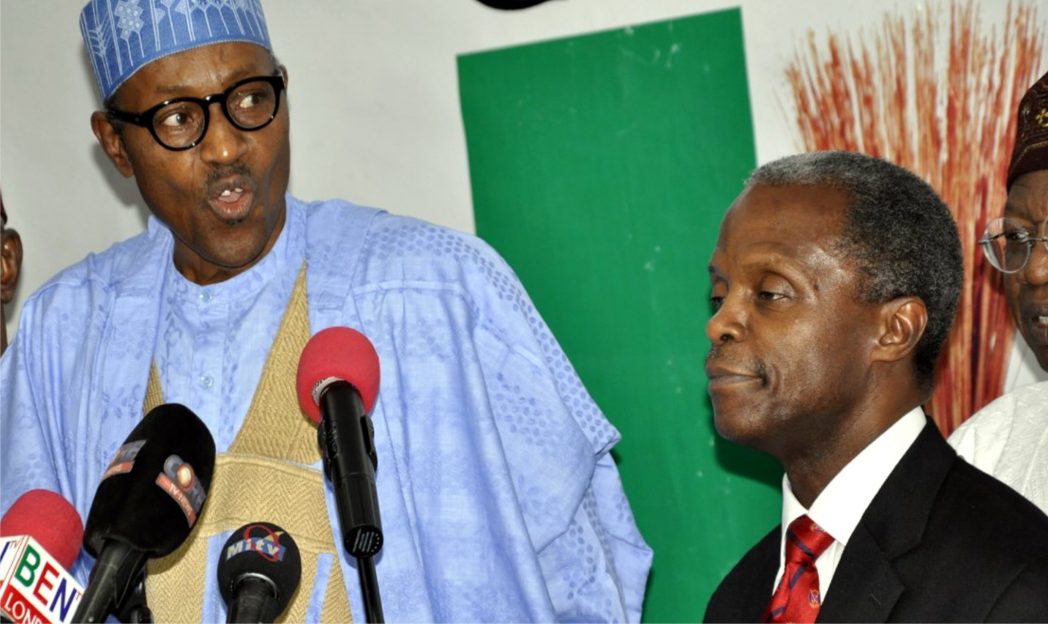 That Obasanjo Book Launch …The Other Face Of Contempt