The House of Representatives finally relieved Mr. Farouk Lawan of his position as the Chairman of the Committee on Education, yesterday.

The House had placed Lawan on suspension since June last year, following his involvement in the controversial $620million bribery saga.

While on suspension, the Deputy Chairman of the committee, Dr. Rose Oko, was asked by the Speaker, Mr. Aminu Tambuwal, to chair the committee in acting capacity.

The suspension initially left a window of possibility that Lawan could be returned to the headship of the committee.

But, yesterday, Tambuwal named a replacement for Lawan, indicating that the four-time (1999 till date) legislator had been removed permanently as chairman.

It was unclear whether the House had confirmed the indictment of Lawan over the bribery allegation, as the speaker did not give reasons for his removal.

The sacking took place while the House is yet to receive the report of its Committee on Ethics and Privileges, which investigated the bribery saga.

However, Lawan and his erstwhile secretary, Mr. Boniface Emenalor, are currently standing trial for the bribery allegation.

It would be recalled that Lawan headed the ad-hoc committee of the House, which investigated the fuel subsidy regime between January and April 2012.

The panel had uncovered how government officials allegedly connived with fuel importers to defraud the nation of N2.07 trillion in the guise of funding subsidy.

But, as the House celebrated the finding, an oil businessman, Mr. Femi Otedola , accused Lawan of demanding $620million bribe from him.

He claimed that the bribe, in Lawan’s explanation, was to clear two of his firms indicted by his committee for subsidy fraud.

Otedola argued that the demand shocked him because none of his firms participated in the subsidy regime.

Meanwhile, the House of Representatives yesterday repeated its call to President Goodluck Jonathan to fire the Director General of the Security and Exchange Commission, Arunma Oteh, in what appears a subtle condition for approving budget amendment proposals sent in by President Jonathan this week.

The president had last Tuesday urged the Senate and the House to revise the 2013 budget, expunge clauses that encroach on his fiscal authority, and provide budgetary funding for SEC, which was denied by the lawmakers seeking Ms. Oteh’s sack.

But the House reminded the president, in a new motion, of its earlier decision seeking Ms. Oteh’s removal from office. The House, however, declined to state whether that was a condition for approving the budget amendments proposed by the president.

Spokespersons of the House, Zakari Mohammed and Victor Ogene, could not be reached for comments. But Minority Leader of the House, Femi Gbajabiamila, conceded that the motion was provoked by the president’s letter to the House on Tuesday.

The SEC chief has been embroiled in a longstanding controversy with the House after she accused the House Committee on Capital Market of soliciting bribes from the commission.

In ensuing investigations early 2012, the House curiously indicted Ms. Oteh and demanded she be removed from office. The Senate later backed the decision, both citing Ms. Oteh’s lack of prerequisite years of experience for the job ahead of her appointment.

Despite repeated resolutions echoing that decision,  Jonathan rebuffed the lawmakers and retained Ms. Oteh in office.

The zero budget for SEC was to force the president’s hand to heed the lawmakers call.

But in a request for amendments to the 2013 budget, Jonathan brushed aside the concerns, and asked that the commission’s budget be restored. The president also rejected clauses inserted by the two chambers to check his powers for the release of budget funds.

He said withholding SEC funds would stifle the market.

The new motion, moved by Deputy Minority Whip, Garba Dati, mandated the House Committee on Legislative Compliance to monitor the president’s compliance and report back within 21 days.

Mr. Dati said the president’s refusal to act on the SEC case was a continuation of blatant disregard for resolutions by the House. 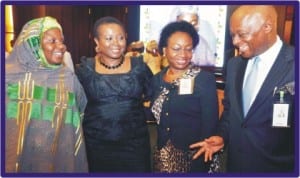