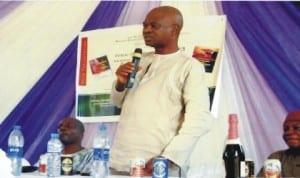 Immediate past chairman, Nigeria Union of Journalists (NUJ), Imo State council, Chief Fidel Onyeneke, delivering a lecture, at the presentation of the books, Musings on Corruption and A Handbook for Editors in Owerri, recently

The Forward Operation Base (FOB), 144 Battalion of the Nigerian Army, Aba, Abia State has said that it had arrested three suspected fake soldiers. The suspects were nabbed for stealing NITEL underground cables.

Capt. Chris Nwogu, the Officer-in-Charge of the base, told newsmen in Aba on Monday, that the suspects included a dismissed lance corporal from the Army Headquarters Garrison, Abuja and a civilian.

Nwogu said the suspects paraded themselves as soldiers, adding that a man who claimed to be a cadet with a fake Nigerian Defence Academy (NDA) identity card was also arrested.

Nwogu said the suspects were part of the syndicate which had been dragging the image of the military in the mud by their nefarious acts.

“We are advising unsuspecting Nigerians to be at alert. These men would wear the military uniform to rob and perpetrate all sorts of crimes.

“If you see the uniforms, you will wonder if this man wants to open his own army. One of them was even seen with army garrison headquarters’ cap. You will think they are real soldiers. Now nemesis has caught up with them,” he said.

Nwogu said that on interrogation, the suspects confessed to dealing on fake military kit, noting that the items recovered from them included 18 pairs of trousers, 45 face caps, 6 singlets, 8 top jackets and 15 bags.

He said that the suspects would be handed over to the State Security Services (SSS).