The Federal Government, has signed a Memorandum of Understanding (MoU) with an oil consortium to establish six modular refineries with capacity to produce 30 million litres of products daily.

The $4.5billion deal, sealed in Abuja between a United States company, Volta Petroleum Resources Limited and its Nigerian counterpart, Petroleum Refining and Strategic Reserve Limited, would enable the building of the refineries in the USA, and shipment to Nigeria for assembling.

The refineries are to be sited in the coastal areas of Nigeria.

The Minister of Trade and Investment, Dr Olusegun Aganga, signed on behalf of the Federal Government while Mr Edozie Njoku signed for the consortium, Petroleum Refining and Strategic Reserve Ltd (PRSR).

According to Aganga, two of the refineries, which will be completed within the next 12 months, are expected to refine between 30,000 barrels and 60,000 barrels of crude oil per day.

He said that the refineries were capable of producing 10 million litres of petrol, diesel, kerosene, and Low Pour Fuel Oil (LPFO).

“Under the agreement, PRSR Ltd and Vulcan Petroleum Resources in joint venture are expected to set up at least six refineries.

“These refineries will have a combined capacity to refine 180,000 barrels of crude per day within the country and produce up to 30 million liters per day of refined oil products within 30 months,’’ Aganga said.

He said that the agreement was in line with President Goodluck Jonathan’s transformation agenda of making Nigeria a highly industrialised nation.

He described the move as the beginning “of a process that would ensure the reduction of importation of industrial raw materials and concentrate more on producing them locally’’.

Aganga said it was high time Nigeria began to change its orientation from being a mere consumer nation to becoming a producer nation.

He said that the government was giving adequate attention to the non-oil sector of the economy, such as agriculture, solid mineral and others where Nigeria had competitive advantage.

The minister, however, said greater emphasis was being given to the petro- chemical industry, adding that “it will provide a strong support base for the establishment of other allied industries, such as textiles.”

He said necessary measures had been put in place to ensure the success of the joint venture which had strong government’s support to make it a reality.

He reaffirmed government’s commitment to accommodate more genuine investors in the country.

Aganga said the firm had a history of performance and a trusted track record having delivered on bigger projects in Russia and other countries.

Njoku, who is the Chairman of PRSR, called for more support and the provision of a conducive environment by the Federal Government to ensure the success of the project.

He urged the government to encourage the establishment of more modern refineries toward alleviating some of Nigeria’s economic problems.

Njoku said, “ this MoU marks a new beginning for the oil and gas industry and the country.’’

He said that when the refineries became functional, the issue of fuel subsidy would be a thing of the past.

“The MoU covers the construction of six identical modular refineries to be operated for the benefit of Nigerians through an in-country refining of crude oil.

“This will eliminate the current subsidy regime and significantly reduce the current market prices of kerosene and diesel by as much as 50 per cent,’’ Njoku said.

He said that the plant would be owned and operated by PRSR/Vulcan Group, adding that it would not require any financial investment from any level of government in Nigeria.

Njoku also explained that during the construction period, more than 10,000 Nigerians would be employed while more than 150,000 direct and indirect jobs would be created through the projects. 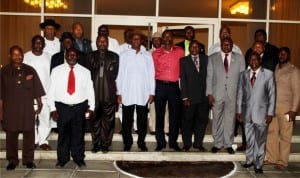