The leader of Abonnema Wharf community in Port Harcourt, Comrade Somiari George says residents are not opposed to government’s effort at developing the waterfront but that they are asking for the resettlement of the people before the project takes off.

Speaking in an interview with The Tide in Port Harcourt, Comrade George said the Abonnema Wharf residents were in support of any government policy aimed at transforming the living standard of the people.

He said, if the policy of the government is to demolish the place and make it an urban or modern area, we will support but what we are saying is that the people affected should be adequately resettled. Abonnema Wharf waterfront is an old settlement, even older than Rivers State.

Citing old Finima in Bonny which is presently housing the Nigeria Liquefied Natural Gas (NLNG), George noted that the habitants were properly relocated, and prayed the government to do same to the Abonnema wharf residents to give them a sense of belonging as indigenes of the state.

Comrade George averred that there had been a lot of misconception about the area and the people residing there, but, noted however, that a few disgruntled elements whose actions painted the people black, have been flushed out.

According to the Abonnema Wharf community leader, there is no society without deviants, saying ‘what is permanent is change and if the government wants to change the place, we are behind it”.

He appealed for the expansion of the Abonnema Wharf road to ensure free flow of traffic since as he puts it , it has become a channel for tankers loading fuel imported into the country.

Assessing the Governor Chibuike Amaechi-led administration, Comrade George said the government has been doing wonderfully well and the Abonnema Wharf community is solidly behind it. He has transformed the state and we want the residents of Abonnema Wharf waterfront to feel the impact.”

On the recent judgement between Governor Amaechi and the APGA gubernatorial candidate Celestine Omehia, he declared, ‘Omehia has no case as every Rivers man voted for Amaechi” and urged Rivers people to continue to rally round the present administration in the state. 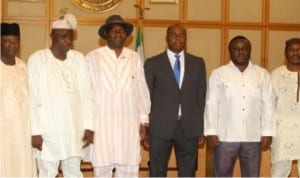