A former Governor of Rivers State, Chief Rufus Ada George, has publicly declared his support for the re-election of Governor Chibuike Rotimi Amaechi, even as an Okrika son is also contesting the governorship elections.

Chief Ada George made this public declaration yesterday, while speaking at the formal flag-off of the Governor Amaechi’s re-election campaign in Isiokpo, headquarters of Ikwerre Local Government Area of the State.

The Okrika-born former Governor of old Rivers State, stressed the need for Rivers people to support Governor Amaechi’s re-election bid in order to continue to project the state in good light.

He recalled that during his tenure as Governor, Amaechi was to be appointed Commissioner for Education, but he (Amaechi) declined, and rather nominated Sir Celestine Omehia, his cousin, for the post.

Also speaking, a one time governorship aspirant in the state, Chief Sergeant Awuse, advised the people of Ikwerre ethnic nationality to put the past behind them, pointing out that Governor Amaechi was already fulfilling the vision of the people as he had performed exceedingly well.

Speaking at the first local government campaign tour of Governor Amaechi, the former DPP guber  standard bearer said the governor had the vision to transform the state.

Chief Awuse said the governor was doing his best to develop the state, noting that “from my personal discussion with him, he is ready to carry everybody along”.

The top Ikwerre politician often referred to as “the Bulldozer” in political circles said he had put the activities of the past behind him, saying, the time for reconciliation and forgiveness had come.

He lauded the Peoples Democratic Party (PDP) for being a strong and formidable party capable of driving the state and the country’s development.

Also in his remarks, National Organising Secretary of the party, Prince Uche Secondus, who represented the party’s National Chairman at the event said the campaign was geared at mobilising the citizenry ahead the elections in April.

Considering the achievements of the governor in office for the past three years, Prince Secondus said the elections would be a walk over for the  him.

He pledged the support of the Presidency and the party to the aspiration of Governor Amaechi and urged the people to vote for the PDP in the elections.

The party’s organising secretary reiterated that it was only the party that could guarantee security and development in the state and therefore appealed to the citizenry to ensure that the government consolidate on its achievements so far.

The national organising Secretary of PDP, Prince Uche Secondus, who described Governor Amaechi as a man of his words, assured him that the national headquarters of the party and the Presidency are in support of his re-election bid, and urged the people to vote for PDP candidates in all the elections

The State Chairman of PDP, Chief Godpower Ake, who also presented party flags to candidates of the party from the area, said, “Governor Amaechi does not require to campaign for re-election as his achievements are there to speak for him”.

In his speech, Governor Chibuike Amaechi, said his administration would uphold the tenets of accountability, transparency and good governance in all transactions involving the state government.

The Governor who tasked the citizenry to always ask questions when public funds were abused, for according to him, such fund belonged to the people, said, “one thing I can assure you is that there must be accountability in this government until we leave office”, and encouraged the public to report public office holders who live in affluence on public funds. 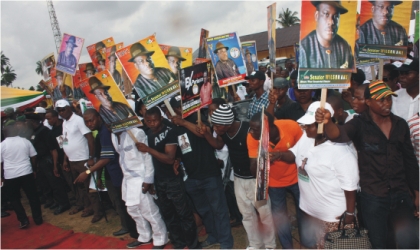 Rivers State Governor, Rt Hon Chibuike Rotimi Amaechi (inset) addressing his teeming supporters who trooped out in their numbers displaying their solidarity, during the flag-off of the governor’s re-election campaign in Isiokpo, headquarters of Ikwerre Local Government Area, yesterday