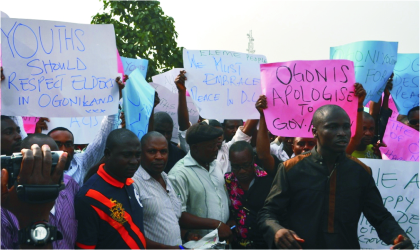 Youths of Ogoniland, led by Chief Gani Topbah on a peaceful demonstration against recent political violence in the area.

Rivers State Government has said that it did not close down the State University of Science and Technology, rather the Lecturers embarked on an indefinite strike, against all entreaties from the state government.

Governor Chibuike Rotimi Amaechi, who explained this yesterday in response to a question on a live radio programme in Port Harcourt, said the state government expects the University teachers under the umbrella of Academic Staff Union of Universities (ASUU) RSUST branch, to abandon the strike and return to work, if they wish to negotiate with the state government.

He said the government was worried about the incessant disruption of academic programmes in the school, occasioned by the lecturers who embark on strike at the slightest excuse, such as sympathy strike with Federal lecturers, and on welfare issues, but are not worried about the state of infrastructure in the institution.

Governor Amaechi called on the leadership of the students union in the institution to seek to know the true situation of things, by holding separate meetings with both the state government and the leadership of ASUU (RSUST branch); noting that it is only through that means that the students and their parents would know the details about the strike action.

On the activities of the Rivers State Traffic Management Agency (TIMA-RIV) the governor urged the public to obey them, but not to bribe the officials, emphasizing that the walk ways provided on the roads are not for car parks, stressing that defaulters should be arrested and made to pay fines.

Commenting on the Ogoni Day incident at Bori, Governor Amaechi, said the attack was not at him but at the Secretary to the Rivers State Government Hon. Magnus Abe, emphasising that he has given directive to the Police to arrest those behind the crisis during the 19th Ogoni Day celebration.

Governor Arnaechi reassured the state that the government would continue to protect lives and property as it was its constitutional duty, pointing out that the period of Amnesty was over, and anybody who engages in criminal activities would be made to face the law.

The governor said he plans to consolidate on the successes of his first tenure if given the second chance, particularly in the areas of Education, Health Care, Road construction, Power Supply, and Agriculture to generate employment.