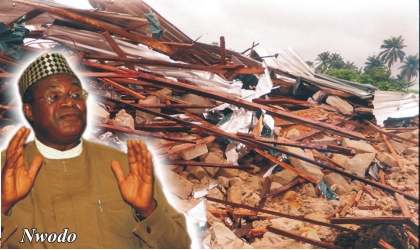 The rubble of the twin bungalow belonging to Dr Nwaedozie Aneke, which was destroyed last Saturday at Eneka, Port Harcourt

Dr Okwesilieze Nwodo, People’s Democratic Party (PDP) new Chairman, in Abuja yesterday declared his commitment to build a new era in the party that would “reconnect Nigerians back to the government in power.”

Nwodo made the declaration during the formal assumption of office at the party headquarters.

According to him, his leadership is out to effect change in the country’s polity through a people oriented government.

The chairman observed that the current disconnect between Nigerians and their government could only be rejuvenated by the ruling party.

“PDP is a winning party but Nigerians detested its winning, therefore the party must work hard to regain the confidence of Nigerians to believe in the party as the livewire of political democracy in the country,” he said.

He expressed his joy on the opportunity given to him to work alongside President Goodluck Jonathan who also believes in change and had remained committed to the sustenance of democracy as well as delivery of free and fair elections.

He said the party officials would give the president the necessary support that would make him succeed on his promises to the people.

“We are deeply committed to a free and fair election in order to win back the confidence of Nigerians as a party,” he added.

Nwodo said that PDP leadership under him was not going to invent “a new thing” to regain people’s confidence but would only concentrate on fulfilling old promises made based on sincerity.

According to him, leaders must always be sincere to the people.

He, however, commended the members of the National Working Committee (NWC), saying they were men of good character and commendable background that would help PDP to the next level of landmark achievements.

Meanwhile, he called on the NWC and other party organs to accord him necessary support given to his predecessor Prince Vincent Ogbulafor while in office.

He also eulogised late President Musa Yar’Adua “as a man of great vision and mission” saying the late president’s philosophy in good governance would guide his operation as the new chairman of the party.

Nwodo also promised an undaunted support of the party under his administration to President Jonathan to assist his dream of giving Nigeria a formidable hope for the future.

Also, he called on the media to support his administration and the party through a well articulated reportage of party activities.

In his address, Deputy National Chairman Bello Mohammed said that the choice of Nwodo to lead the party was ordained by God.

Mohammed, who was the Acting Chairman of the party since the exit of Ogbulafor from office, said that Nwodo was not a new hand in PDP administration as the former National Secretary of the party.

He promised unreserved loyalty to the new chairman as well as the president.

“We are going to work with you in good faith because we believe in your leadership,” he said.

Mohammed also assured the new Chairman of a strong and cohesive party that stood to be beaten during the 2011 general election.

“PDP is still a strong party and ever remained the choice of the people across the nation. Therefore the leadership of the party under this experienced chairman will add value in order to deliver goodwill to Nigerians,” he said.

It would be recalled that Nwodo became the chairman of PDP at the 51st National Executive Committee (NEC) meeting in Abuja.

Meanwhile, the PDP on Friday announced the dissolution of the PDP Reform Forum.