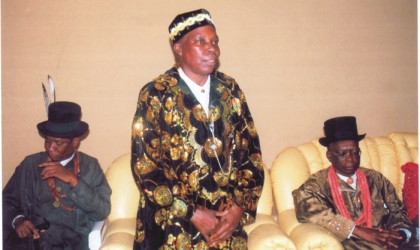 The Governor explained that some members of the public had started expressing doubts over the  sincerity of the administration  because some government functionaries live very flamboyant lifestyle.

He stressed the need for them to realise that public funds must not be channeled into private pockets, emphasising that for the system to be efficient and effective, they must work as a team

The State Chief Executive urged all public office holders to take the business of government more seriously, saying that the system cannot function without them, because  their role  was critical to the success or failure of the administration.

In a lecture an International Motivational Speaker, Dr Myles Munroe, blamed the problem of most governments and leaders across the world, especially politicians, on lack of basic leadership skills.

Dr Munroe said, most public officers were voted into office without any formal training and leadership, adding that leaders must see themselves as people at the bottom of the ladder in society.

Munroe, who spoke on the theme “Understanding the Nature of Leadership: Retooling our Philosophy of Leadership” said, the hallmark of true leadership is the capacity to translate vision into reality, adding that leadership consisted of 80% attitude and 20% skills.

While emphasising that leaders must believe in themselves, he added that successful leaders were those who were result-oriented with caring attitude, and are spiritually sensitive.

He commended Governor  Amaechi for organising the Leadership Conference for the state’s heads of government institutions, ministries, Departments and Agencies, saying that the governor has  good vision for the state.