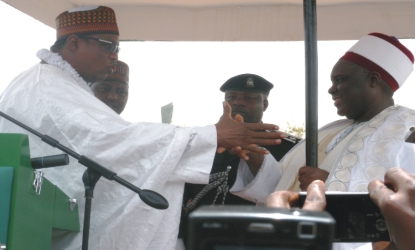 The Rivers State Government says its ambitious road projects and other infrastructural development in the coastal communities of the state like land reclamation are geared towards fast-tracking economic growth to those communities which never thought of having such in their life history.

Governor Chibuike Rotimi Amaechi said this while conducting the Management of the Nigeria Television Authority, NTA, Network Port Harcourt Centre, around the various projects embarked upon by the state government.

Governor Amaechi said the people of Opobo Town, Ikuru Town, and other riverine communities in Andoni Local Government Area would soon access their communities by road, stressing that the State Government was delighted to spend billions of Naira on the projects to turn around the economic fortunes of the people.

On how to redistribute the reclaimed lands in Opobo Kingdom, Governor Amaechi said the communities would be left to decide how the land would be re-distributed among themselves, emphasising that the State Government would not interfere even though it is Government reclaimed land.

The Governor also disclosed that his administration would introduce special allowance for teachers in the rural areas to encourage them take up postings to the rural communities.

Governor Amaechi said the bills for the proposed Primary Healthcare Board and Social Welfare Tax, when passed into law by the State Assembly, are intended to institutionalise and sustain these projects/programmes beyond his administration.

He further disclosed that his administration has decided to introduce a scholarship scheme for civil servants beside regular in-service trainings, noting that part of the money saved from the Christmas bonus will be used to fund the scheme.

On the Scrap to Wealth plant at Kira-Tai, the Governor said, would be ready in six months time, adding that the plant would be providing jobs for many people in the industry, the state has the technical man-power to operate the plant.

At the Trans Amadi gas turbine, the State Chief Executive said power generated are presently under-utilised, blaming the problem on the refusal of the Federal Government to allow the State Government re-distribute power generated from the State Independent Power Project (IPP) through the Power Holding Company of Nigeria (PHCN) transmission line.

The tour took the Governor and his entourage to some Primary, Secondary schools, Health Centres, Roads and Bridges projects in Opobo/Nkoro, Andoni, Eleme and Obio/Akpor Local Government Areas of the State.