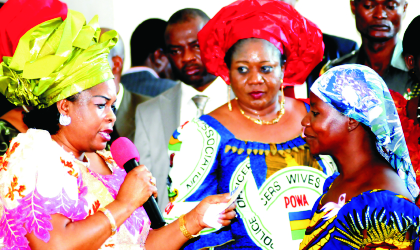 Wife of the Acting President, Mrs Patience Goodluck Jonathan, presenting a cheque to Mrs Martha Usman, member, Police Wives Association (PWA),at the seminar on Enhancing the Economic and Health Status of Police Families and Disbursement of Loans by NPF Micro Finance to POWA/PWA members in Abuja. With them is wife of AIG Zone 6, Mrs Filomina Ogboudu, last Monday.

The former President of the Nigerian Bar Association (NBA), Chief O.C.J Okocha, has blamed the low reading culture among Nigerians on the incursion of the military into Nigerian politics.

Chief Okocha said this shortly after the unveiling of the Library Port and the public presentation of the Reading Bridges Magazine in Port Harcourt, yesterday.

He said that the military promoted mediocrity above hardwork, a situation that led to the erosion of the nation’s value system.

The former NBA president commended the initiator of the project, Mrs Mina Ogbanga and urged the public to support her.

Also speaking, the state  Commissioner for Education, Dame Alice Lawrence Nemi said that the project was in consonance with the educational programme of the present administration aimed at ensuring quality education in the state.

Dame Nemi who was represented by a director in the ministry, Mrs Peterside urged non-governmental organisation to join in the crusade for quality education in the state.

In her welcome address, the executive director of the centre, Mrs Mina Ogbanga said that the project would address the poor reading culture among Nigerians.

Mrs Ogbanga decried the mass failure in  both WAEC and NECO examinations and urged Nigerians to take advantage of the opportunity to improve themselves.