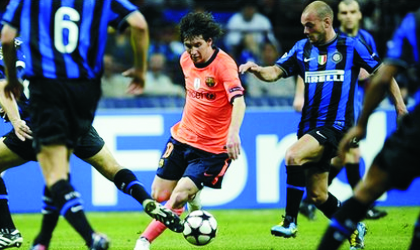 Inter Milan produced a fine first-leg display as they came from behind to beat holders Barcelona and take control of their Champions League semi-final.

Barca, who dumped Arsenal out in the last round, went ahead when Maxwell’s left-wing cross found Pedro to slot in.

Inter levelled as Wesley Sneijder fired in right-footed from a Diego Milito pass and Milito then teed up Maicon to control and slam home to make it 2-1.

Milito nodded in after Sneijder miscued a header to put Inter firmly in charge.

The result gives Barca a mountain to climb in the second leg in Catalonia on Wednesday 28 April as they seek to become the first team since AC Milan in 1990 to defend the European Cup.

They quickly secured the advantage of an away goal, but they will be bemused by how badly things went wrong thereafter.

With Lionel Messi subdued, Inter cashed in on their supremacy in devastating style and the Italian champions now stand on the brink of a first appearance in the final since 1972.

Yet it all started in typical fashion for a Barcelona side used to having their own way, as Pep Guardiola’s men dominated the early stages at the San Siro.

They capitalised on a Milito miss after Victor Valdes had saved from Eto’o, the visitors surging up the other end as Maxwell was allowed to get to the byeline down the left and pull the ball back for Pedro to coolly roll home his 20th goal of the season.

Inter were seeing less of the ball than their opponents, but they were dogged in defence and threatening in the final third and after Milito bent a hugely presentable chance wide, they equalised on the half-hour mark.

As Eto’o crossed from the Inter right, the Barca defenders all got sucked into the middle, including right-back Daniel Alves – and when Milito turned and teed up Sneijder, the Dutchman had the freedom of the park to lash in a leveller.

Barca, denied the space with which to operate, were struggling to find anything like their usual fluency as Inter doubled up on Messi and denied the frequently influential Xavi the time to spray passes around.

Just after the break Goran Pandev failed by inches to latch on to Milito’s ball from the right, but the Italians did not take too much longer to get themselves ahead.

Messi lost the ball in his own half and Inter broke with pace, the ball finding its way to Milito on the right-hand side of the area – the Argentine picked out the marauding Maicon as the Brazilian took a touch and rammed past Valdes.

Barca, perhaps weary after their 14-hour coach trip to get to Milan, tried to respond, but Messi’s shot and Sergio Busquets’ header were both well saved by Julio Cesar in the Inter goal.

On the hour mark, Jose Mourinho’s men took firm control of the tie. They broke quickly again and after Sneijder had completely misdirected his header from an Eto’o cross from the right, Milito was on hand to nod in from point-blank range.