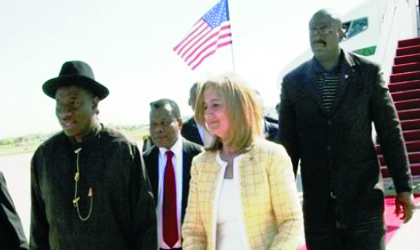 Nigeria’s Acting President Goodluck Jonathan, (left), arrives the Andrews Air-force Base Airport, Washington DC, United States of America, while on a four-day working visit. He was recieved by the US Ambassador to Nigeria, Ms Robin Sanders, yesterday

Oil companies operating in the country have flared an average of 127.19 Billion Standard Cubic Feet (BSCF) of Gas per quarter, the Nigeria National Petroleum Corporation (NNPC), has said.

According to the latest edition of NNPC’s quarterly Petroleum Information, 32 percent of associated gas produced was flared, while 267.08 BSCF of gas was utilised in the past quarter under review.

It was followed by Esso, an affiliate of Mobil Producing which flared 9.73 BSCF, 46.67 percent out of its gas production of 20.85 BSCF of gas.

The Quarterly indicated that total gas production in the industry stood at 394.28 BSCF out of which 267.08 BSCF was utilised in the country in the last quarter.

The country produced a total of 329,100 metric tons of Natural Gas Liquids from Mobil’s gas to liquid condensate plant out of which 49 percent or 161,260 metric tons accrued to NNPC as its joint venture share.