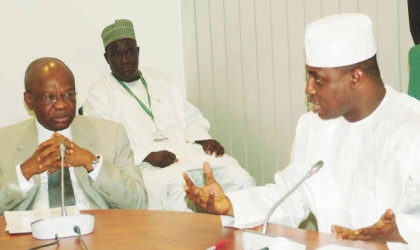 INEC Chairman, Prof Maurice Iwu (left), Listening to the Speaker, House of Representatives, Dimeji Bankole, during the visit of INEC officials to the leadership of the House in Abuja, last Friday.

Acting President, Dr Goodluck Jonathan, has described the late Rivers State Commissioner for Employment Generation and Empowerment, Mr Moses Ahubele, as a compatriot that dedicated himself to the service of his community, state and country.

Dr Jonathan, who stated this yesterday during the funeral service of late Mr Ahubele at St Barnabas Anglican Church, Abarikpo, in Ahoada East Local Government Area of Rivers State, said the late commissioner distinguished himself in selfless service to humanity, particularly the less-privileged in society.

The Acting President, who was represented at the burial service by HRH, Chief A J. Turner, the chairman of Federal Inland Waterways, eulogised the late Ahubele, noting that his demise saddened his heart, but prayed God to receive him into His Eternal bosom and grant the family the grace to bear the loss.

Also speaking, Rivers State Governor, Rt Hon Chibuike Rotimi Amaechi described the late Moses Ahubele as a responsible and honest man, pointing out that within the short period he served in the state executive council, he did his best to change the course of the destiny of Rivers people.

Governor Amaechi said what the government and people of the state owe the bereaved family was prayers, and appealed to close associates and friends of the family to continue to assist his wife and children after the burial ceremony, pointing out that people tend to turnout more at burial ceremonies, only to forget the bereaved family after the burial.

The governor, who announced a personal donation of N5million to complement the effort of the late commissioner towards the completion of the Saint Barnabas Anglican Church, Abarikpo building projects, explained that he had decided to maintain his promise not to use public money to build churches.

Earlier in his sermon, the Bishop, Diocese of Ahoada, Church of Nigeria Anglican Communion, Rt. Rev. Clement Ekpeye had called on Christians to conduct themselves in a manner that is worthy of emulation while on earth by shunning evil acts that would attract the wrath of God.

He also enjoined Christians to repent in order not to face the second judgement of God, and.  lauded the contribution of late Moses Ahubele towards the growth of the church in the area.

Highlights of the burial ceremony include laying of wreaths by Governor Amaechi and the National President of the University of Port Harcourt Alumni Association, Mr Samuel Iyoyo.

US Supports Grip On Power