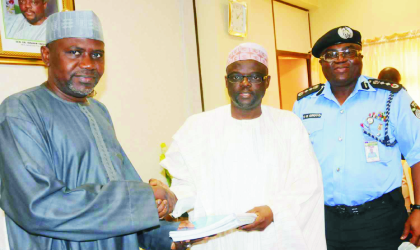 The Tide gathered that those threatening the court action are former cabinet members loyal to ailing President Umaru Yar’Adua.

The argument behind the threatened court action is based on the fact that the ailing president lacked the power to sack Yar-Adua’s appointees as he was not sworn into office.

Reports also has it that the aggrieved ministers may be planning to use the court case to slow down the acting president and his actions to give time to the ailing president  to recuperate and resume full presidential duties.

Top on the list of lobbyists include, politicians, representatives of social, ethnic, religious and regional groups, retired military generals and members of the dissolved executive council.

In the mounting political tension generated by the recent cabinet dissolution, some Nigerians have cashed in on the lobbying for political appointments to make brisk money. Lobbyists are now made to pay between 10 to 15 million naira to the smart Nigerians close to the corridors of power to help them secure appointments from Acting President Jonathan.

But the Acting President, Goodluck Jonathan, chairman Presidential Advisory Council, Gen Theophilus Danjuma (rtd) and the National Chairman of Peoples Democratic Party (PDP),Prince Vincent Ogbulafor are alleged to have insisted on thorough screening of the appointment list to ensure that only credible Nigerians are appointed.