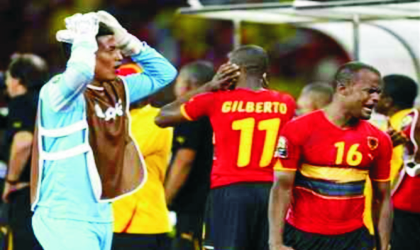 Angola’s Flavio (right) and teammate Angola’s Alegre Wilson (left), react at the end of play after their African Cup of Nations Group A soccer match against Mali ended 4-4 at the November 11 stadium in Luanda, Angola, yesterday.

As Nigeria intensifies its diplomatic effort to get herself delisted from the United States of America’s terror list, citizens have condemned the action of the US.

A cross section of Nigerians who spoke to The Tide in Port Harcourt described as unjustified the United States government listing of Nigeria as a terror sponsoring state.

Speaking to The Tide on the issue, Mr Mark-Balm of the University of Port Harcourt said that though Farouk Abdulmutallab is a Nigerian, he spent most of his life in the west where he was indoctrinated by Al Qaeda, adding that his crime should not be used to judge the generality of Nigerians.

In his view, the South-South zonal co-ordinator of the Christian Association of Nigeria (CAN), Apostle C. D. Numbere said that though the United States Government has the right to protect its citizens, listing Nigerian as a terrorist state is unjustified.

He said that a whole nation cannot be punished for the action of one man, stressing that the government of Nigeria has already condemned Farouk’s action.

Also speaking, the former president of Pentecostal Fellowship of Nigeria (FEN), Rivers State, Apostle Eugene Ogu said that it behoves the government to the United States to remove Nigeria, from the terror list, because Nigerians are not know to be violent extremists.

However, the South South zonal co-ordinator of the National Support for Yar’Adua/Jonathan Presidency, Dr Enoch Onyeche who condemned the action of the United States described it as unjustified, especially since the older Muttalab warned security agencies about his son’s change in Behaviour.

He noted that rushing to conclusion was not the best strategy in governance and urged the US to take a second look at the affair as it relates to Nigeria and her entire citizenry.