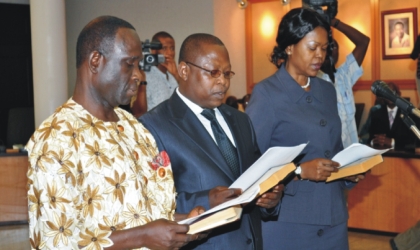 A Passenger on board the same Northwest Airline flight that was attacked on Christmas day was taken into custody in Detroit, United States of America, on Sunday, after becoming disruptive upon landing, according to law enforcement officials.

An official who spoke on condition of anonymity as investigation was on-going, said the man was Nigerian and had locked himself in the airliner bathroom.

However, subsequent investigation revealed he was a businessman who took ill during the flight.

Reports said, security and airline personnel were on edge since the attempted terror attack on Christmas, adding that lesser incidents had been reported on other flights arriving Detroit but that incident with the Nigerian youth had sparked the most concerned.

Meanwhile, Nigeria on Saturday ordered a top-level probe after a botched attempt by a young Nigerian to blow up a US plane as it was preparing to land in Detroit, a government statement said.

“The Vice President of the Federal Republic of Nigeria, Goodluck Ebele Jonathan, has directed Nigerian security agencies to commence full investigation of the incident,” the statement said.

Information Minister, Dora Akunyili said Abuja had learnt with “dismay the news of an attempted terrorist attack on a US airline.

“We state very clearly that as a nation, we abhor all forms of terrorism,” she said in the statement.

Abdul Farouk Abdulmutallab, 23, was badly burned as he tried to set off a sophisticated explosive device on a Northwest Airlines Airbus A330 carrying 278 passengers and 11 crew as it began its descent into Detroit on Christmas Day.

He was overpowered by fellow passengers and arrested by US security agents on arrival on Friday.

Media reports said Abdulmutallab, who boarded the plane in Amsterdam, had flown to the Dutch city’s Schiphol airport from Lagos.

“While steps are being taken to verify the identity of the alleged suspect and his motives, our security agencies will cooperate fully with the American authorities in the on-going investigations,” the government statement said.

The would-be bomber is the son of a former chief of the United Bank for Africa and First Bank of Nigeria, Umaru Mutallab, an accountant and businessman.

There was no independent confirmation of the report.

According to other reports Mutallab used to study engineering in London.

Meanwhile, the US government has tightened airline security as it searches for answers to how a 23-year-old Nigerian man eluded extensive systems intended to prevent attacks like his botched Christmas Day effort to blow up a Northwest flight from overseas.

The suspect who claimed ties to al-Qaida was charged Saturday with trying to destroy a Detroit-bound airliner, just a month after his father warned US officials of concerns about his son’s religious beliefs.

Airports worldwide tightened security a day after the passenger tried to detonate a device that contained a high explosive on a flight into Detroit. After that attack, passengers have had to contend with extra pat-downs before boarding, staying in their seats without blankets or pillows for the last hour of the flight and more bomb-sniffing dogs.

Aides to President Barack Obama are pondering how terror watch-lists are used after the botched attack, according to officials who described the discussions Saturday on the condition of anonymity so as not to pre-empt possible official announcements.

These adjustments came after the Justice Department charged that Umar Farouk Abdulmutallab willfully attempted to destroy or wreck an aircraft; and that he placed a destructive device in the plane.

An affidavit said he had a device containing a high explosive attached to his body. The affidavit said that as Northwest Flight 253 descended toward Detroit Metropolitan Airport, Abdulmutallab set off the device  sparking a fire instead of an explosion.

According to the affidavit filed in US District Court in Detroit, a preliminary analysis of the device showed it contained PETN, a high explosive also known as pentaerythritol. This was the same material convicted shoe bomber Richard Reid used when he tried to destroy a trans-Atlantic flight in 2001 with explosives hidden in his shoes.

The investigation stretched to London, where officers from the Metropolitan Police, the force involved in most of the major terrorism investigations in Britain, cordoned off the street outside a white stone apartment block in a well-to-do area of central London on Saturday. A police spokeswoman said the force was carrying out searches in connection with the incident in Detroit.

University College London said Abdulmutallab was enrolled at the school from September 2005 to June 2008. In Nigeria, the father of Abdulmutallab said his son had been a student in London, but had left the city to travel.

US authorities told The Associated Press that in November, his father, a prominent banking official in Nigeria, went to the US embassy in Abuja, Nigeria, to discuss his concerns about his son’s religious beliefs.

Meanwhile, various Nigerian groups abroad have continued to denounce the botched bomb attack on a US plane by the young Nigerian suspect.

In its reaction, the Supreme Council of Islamic Affairs in Nigeria condemned the failed attempt by a Nigerian suspect to blow up a US airliner, saying it appeared to be an isolated case. “We are embarrassed by this incident and we strongly condemn the alleged action by this young man,” Lateef Adegbite, secretary general of the Supreme Council for Islamic Affairs in Nigeria, said yesterday.

“But it should be seen as an isolated incident,” he added.

“We do not think that there is any organized Islamic group in Nigeria that is inclined to such a criminal and violent act. We condemn such an extreme viewpoint and action.”

In its view, the All Nigeria American Congress (ANAC) and its constituency of Nigerians in the international community, says it stand together in denouncing the attempted terror attack over the Christmas holidays by Mr Umar Farouk Abdul Muttalab, who according to reports happens to be a Nigerian engineering student in the United Kingdom.

Mr Muttalab’s actions are in no way reflective of our feelings towards our host countries, in fact, we have assimilated well into our new communities and most of us have been model citizens in said communities, ANAC said.

The World Igbo Congress, on behalf of all Igbos in the Diaspora expressed shock by the attempted bombing of Northwest Airline Flight 253 by Umar Farouk Abdul Mutallab. World Igbo Congress condemns this act of terrorism and wishes to dissociate its people from all acts of terrorism and calls on the Nigerian government, the United States of America and all well-meaning peoples of the world to investigate this act in all its ramifications in order to forestall such occurrences in the future.

World Igbo Congress pledges its support for the war on terrorism and calls on all Nigerians to step up all efforts in their direction.