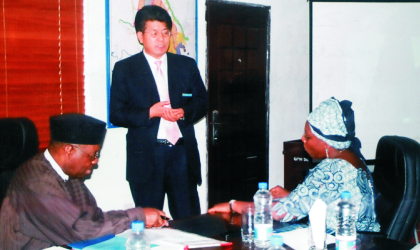 The Rivers State Governor, Rt. Hon. Chibuike Rotimi Amaechi, has directed that official written queries be issued to some members of the State Executive Council, for turning up late to a scheduled monthly inter-ministerial meeting, in Government House Port Harcourt, Monday.

Also to be served with similar queries are some Permanent Secretaries and Special Advisers, as well as Heads of Parastatals and institutions who also turned up late to the routine meeting.

Governor Amaechi while giving the order, frowned at the non-challant attitude of some government officials who treat important issues with levity, saying, “they think we are joking and feel that they can walk in at their timing”.

He directed the Secretary to Government, Hon. Magnus Abe, to take a head count of all Commissioners, Permanent Secretaries, Special Advisers, Local Government Chairmen, and Heads of Departments and Institutions present, as at 5five minutes past 10 O’clock in the morning, and issue queries to those not yet seated as at then.

It would be recalled that Governor Amaechi had walked into the Banquet Hall, venue of the meeting on schedule, and seeing the scanty attendance, asked the commissioners and other officials present to rise for roll call.

Governor Amaechi who had instituted the Inter-Ministerial meeting as a way of harnessing the productivity of all tiers of government, wondered why such key officers of government stayed away from the meeting noting that the query would serve as a deterrent.