For the first time in Rivers State and indeed Africa, Port Harcourt will play host to film producers and actors all over the world as the ION film festival kicks-off today.

Ahead the programme expected to run through to Sunday this week some film stars and experts had arrived the city yesterday and among them is Julie Dash, an accomplished African-American on screen-writing.

The festival will kick-off at the Silverbird Cinema complex in Port Harcourt, while the guests will be hosted later evening at a dinner by the Rivers State Governor, Rt. Hon. Chibuike Amaechi.

On Thursday, the guests will conduct a media tour of the Garden City after which they will be hosted for Gala Night, this time with participants and other attendees.

A statement released by Creative Director of Omcomm, the organiser, Caterina Bortolussi said most of the workshops will be held at Silverbird Cinema Hall 3 in Port Harcourt on Friday.

Among the workshop facilitators is Doby Flewellyn who will speak on film budgeting, networking, and financing. Flewellyn is the principal and cofounder of Film Bankers International.

Vir will be joined by other Nollywood actors and producers from Nigeria like Amaka Igwe, Zeb Ejiro, Stephanie Okereke and Nkem Owoh alias Osuofia.

The statement indicates among other things that attendees will learn how to develop a story from idea and into screenplay, the basic techniques of digital cinematography and lighting.

The event will end on Saturday with the commencement of CARNIRIV. The State Commissioner for Tourism and Culture, Hon. Marcus Nle-Ejii had noted that both IONIFF and CARNIRIV will open new frontiers in tourism within the state.

Aside this, he had declared that economic benefits are enormous since a lot of visitors will be in the state during the fiesta.

Meanwhile, the Okrika Divisional Council of Chiefs (ODCC) has dismissed as baseless and unfounded widespread speculation that it ordered all Okrika speaking cultural groups to boycott the forthcoming Rivers Cultural Festival tagged CANIRIV 2009.

In two separate interviews, chairmen of the Okrika Divisional Council of Chiefs and that of Ogu/Bolo Council ofChiefs, Chief (Dr) Taribo-Sekibo Odabaji and Chief Marshall Okia Oforibokakabe said at no time did the chief’s body take such a decision.

Chief Odabaji  explained that it would be insane for Okrika Chiefs to take such a decision because the chiefs and people of Okrika are not at war with the Rivers State government.

On his part, the chairman of Ogu/Bolo council of Chiefs, Chief Oforibokakake corroborated the view of Chief Odakaji but added that if there was any such injunction a chief from Ogu have been part of the Ogu/Bolo contingent in preparation of CANIRIV 2009. 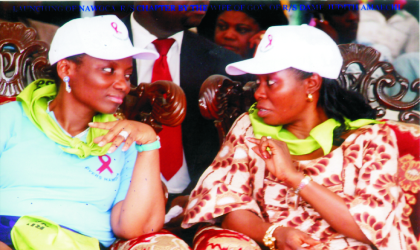 Amaechi Queries Commissioners, Others For Lateness