Governor Amaechi said this yesterday when members of the House of Representatives Committee on Electoral Matters paid him a courtesy visit at Government House, Port Harcourt.

The governor, who stated that the success or failure of democracy in Nigeria rests on the shoulders of those charged with the responsibility of effecting necessary changes in the system, particularly through the Electoral Reform Bill, noted that failure to effect the changes now would be detrimental to the process.

“I agree that there are other reasons why people fight with their blood during elections, but if the electoral processes are free, transparent and provides equal opportunity for everybody, then violence can be reduced but when a man has no faith in the system, he takes law into his hands”, Governor Amaechi said.

He called for solutions to the electoral problems facing the country, noting that the essential element to be put in place is the punishment for breaching electoral law, pointing out that under such situation, the criminals would not allow the politicians to use them.

The State Chief Executive opined that when votes count at elections, the politicians would become more responsible while commending the National Assembly and President Umaru Musa Yar’Adua in their pursuit for a transparent election in the country.

The chairman, House of Representatives Committee on Electoral Matters, Hon. Musa Sarkin Adar, said they were in the state to carry out their oversight function and assess INEC utilization of funds appropriated to it in this year’s budget before considering the next budget estimate.

Hon Adar said the committee is also looking at INEC’s level of preparation for the next election, especially as INEC’s introducing the concept of zonal stores to house sensitive electoral matters for easy distribution to states within the zone and thanked the state governor for the warm reception with the state government to assist INEC with a better land to build the zonal store. 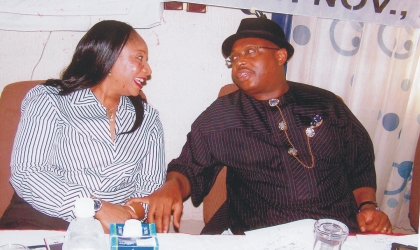 Rivers State Commissioner for Health, Dr Sampson Parker (right) in a chat with the chairman, House Committee on Health, Mrs Irene Inimgba during the official flag off of the new state strategic plan for 2010-2015, yesterday