Some staff of the security department of the Federal Airports Authority of Nigeria (FAAN) may be sanctioned over last Friday’s mid air explosion at the Port Harcourt International Airport, Omagwa.

Already, the management of FAAN has commenced investigation into the incident which involved an Arik Airline plane at the Airport .

The Arik Aircraft with registration number 5N-MJH was said to have had an explosion in one of its luggage compartments, but the situation was brought under check by the quick intervention of the  female hostesses who rose to the challenge and put off the fire with the aid of fire extinguishers on board the aircraft.

The General Manager, Public Affairs of FAAN, Mr Akin Olukunle who confirmed this to The Tide said after the investigations, serious measures would  be taken on those who were on duty at the various screening points at the Abuja Airport.

Mr Olukunle said no officer has been punished but assured that those found guilty would not go unpunished as a committee had been raised to investigate how the explosive substance was smuggled into the plane, noting that the explosion occurred 30 minutes after the plane had taken off from Abuja and was about to land in Port Harcourt.

He further assured that the authority would not let the matter die.     Meanwhile, the State Security Service Director in charge of Port Harcourt airport, Mr Amao said that the suspect has made some useful statements but refused to talk about the next line of action to be taken.

It would be recalled that a senior magistrate with the Rivers State Judiciary was arrested at the airport in connection with the explosion.

It was gathered that the explosion was contained in the handbag of the senior magistrate. The situation which caused panic among passengers on board was brought under control by the air hostesses who were able to put off the fire and control the smoke with a fire extinguisher on board. 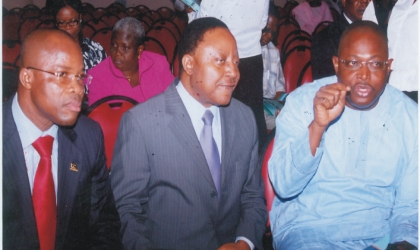 Rivers State Commissioner for Health, Dr Sampson Parker (right) discussing with his counterparts of the Finance and the Urban Development Ministries, Hon George Feyii (centre) and Barrister Osima Ginah respectively at the launch of the State Government E-Service Portal in Port Harcourt, recently.