The ship which has a capacity  of 1.3million barrels of crude oil was allegedly impounded by men of the Nigerian Navy while loading crude oil from the Tuma Manifold near Bille, belonging to the Shell Petroleum Development Company of Nigerian (SPDC).

The vessel, MV Okiki with International Maritime Organization (IMO) registration  No.6722284,  concealed by the crew members allegedly arrived Rivers State from Lagos on October 24, this year.

The ship captain Segun Yusuf, however told newsmen on board the vessel that he was temporarily employed by Ocean Parade, a company based in Lagos to lead the ship to Rivers State for an undisclosed mission.

Upon discovering the mission of the expedition, he explained, he at once decided to return back to base but was allegedly over-powered by nine of the crew members now at large.

According to him, the crew members directed him to the SPDC manifold where they were arrested by the Navy.

Reacting to the incident, the Commanding Officer, NNS Pathfinder Port Harcourt, Commodore Yusuf J. Hinna said that the vessel has been under constant surveillance since its arrival in the state.

Commodore Hinna who described the incident as an economic sabotage said that its sophistication showed that there must be internal collaborators.

He said that the command will not rest on its oars until all those involved in the nefarious act are apprehended. 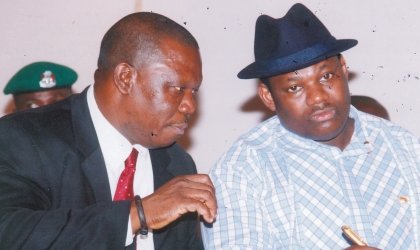