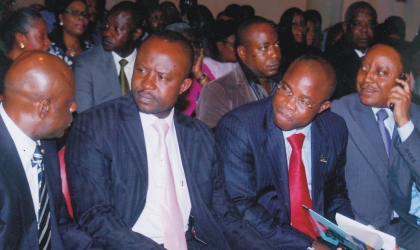 The Chief of Staff, Government House, Port Harcourt, Chief Ezebunwo Nyesom Wike has appealed to aggrieved  members of the Peoples Democratic Party (PDP) to bury the hatchet and rally round the government of Rt. Hon Chibuike Rotimi Amaechi to enable him grapple with the enormous responsibilities of moving the state forward.

Chief Wike made the appeal yesterday in an interview with newsmen at the Airforce Base on arrival from Abuja where he attended the Supreme Court session that dismissed the application brought before it by Sir Celestine Omehia.

Chief Wike said the ruling of the Supreme Court laid to rest the tension generated by the prayers of Sir Omehia that the apex court should reverse itself on the landmark judgment of October 25,2007, which ordered Rt. Hon. Chibuike Rotimi Amaechi to be sworn-in as the substantive governor of Rivers State.

Chief Wike, used the opportunity to call on Sir Celestine Omehia to come back and support his brother and those working with the present administration to improve the fortunes of the state.

On the matter involving Chief Bekinbo Soberekon of Accord Party, Chief Wike said the Accord Party Governorship candidate in the 2007 election is asking the court to grant him leave to file an appeal and the leave has not been granted, noting that the hearing of the appeal itself would come later.

Also speaking, the Commissioner of Information, Mrs Ibim Seminetari said time has come for everybody  to come together to move the state forward as the political rancour was not really necessary.

Mrs Seminetari opined that since the Supreme Court, which has the final say on constitutional matters, has said that there was nothing more to discuss on Amaechi’s candidature as governor of the state, what remains is for Sir Celestine Omehia and other party members to embrace the status quo and support the governor whose policies are people- oriented.

In his comment, the Chairman of ObiojAkpor Local Government, Mr Timothy Nsirim noted that Governor Amaechi has already won the heart of the people through his laudable policies and programmes, especially in the health and education sectors and other infrastructure such as roads, appealing that Rivers people should join hands with Governor Amaechi to make the state a better place.