The Rivers State Government has blamed the problem of youth restiveness and other social crises in the country on the inability of government in the past to plan and make accurate projections for future development.

The State Governor, Rt. Hon. Chibuike Rotimi Amaechi told members of team six course 18 from the Nigerian Defence College who were in the state on a Geo-strategic study tour in an interactive session in Port Harcourt, that the traditional model of youth empowerment in Nigeria where programmes were designed to share money to youths was responsible.

Governor Amaechl, who was represented by the Secretary to the State Government Mr. Magnus Abe, said it was in realization of this failure of past government that the present administration in Rivers State decided to adopt a model of providing sustainable growth through planning evaluation and achievable projections.

He emphasized that Nigeria as a nation needs to focus on working for sustainable growth that would guarantee the wellbeing of the citizenry as the security of the country cannot be divorced from the happiness and patriotism of its people, maintaining that any successful government must be value driven.

According to him, any system whereby government provides infrastructure based on existing population, without taking into account the future increase in population to make corresponding projections, is likely to breakdown.

The Governor disclosed that part of what brought down crime in the state was government’s public works programme which created jobs for a lot of youths as it decided not to share money as a way of empowering the youths.

He explained that under the public works programme, the building of 250 Primary Schools, 150 Health Centres, breaking of fences and massive construction and expansion of roads across the state engaged so many youths and put money into their pockets.

The State Chief Executive maintained that the state was determined to utilize its capacity to achieve a level of security comparable to what is obtainable anywhere in the world noting that it is working towards building a stable and secured environment where investment could thrive.

In his remarks, the commandant of the Nigerian Defence College, AbuJa, Rear Admiral G. J. Jonah said he totally agreed with the youth empowerment philosophy of the Rivers State Government.

Rear Admiral Jonah who observed that things were not bad in Rivers State as reported noted that the state is one of the few states that have been identified as focus for the NDC programme and thanked the state government for its show of support and hospitality to members of the team. 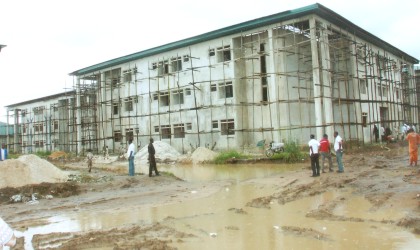