No fewer than 15,000 youths are expected to go through the rehabilitation exercise following the amnesty granted by the Federal Government to Niger Delta militants.

The hint was given by the Director of the State Security Services (SSS) in Rivers State, Bassey Etteh in a paper he presented to participants of Course 18 of the Nigerian Defence College (NDC) in a tour of the state.

Mr. Etteh disclosed that most of the youths involved in the process were between the ages of 15-27 years and may have gotten into crime because of unemployment.

The SSS Director warned that with the amnesty, crime rate may gradually swell and so stressed the need for a quick rehabilitation exercise to re-integrate the misled youths back to society.

If the rehabilitation exercise is managed well, as being done in Rivers state, he submitted that shocks and challenges that may come with the gesture would be effectively contained.

Apart from unemployment, Mr. Etteh identified cultism, and backwardness in the local government areas as responsible for creating room for the youths to join bad gangs.

He noted that the situation has made security of oil installations very vulnerable to sabotage since a lot of unemployed youths resort to illegal bunkering and other criminal activities to survive.

The SSS boss recommended a legal and social framework to curb the menace, while commending the efforts of Rivers State Government in incorporating the youths in its policies.

In his submission, Chairman of the Rivers State Social Rehabilitation Committee, Chief Albert Horsfall speaking through Chief Emmen Chike stated that the body has so far rehabilitated over 200 youths.

Chief Horsfall expressed fears that the state would have experienced a generational gap and loss of huge manpower but for the amnesty and rehabilitation programme.

Affirming that the amnesty is timely, the SCR Chairman noted that the primary objective of the body is to re-orientate the youths and put them back on track.

He blamed some selfish politicians who used and dumped the youths as partly responsible for the problem, disclosing that the committee would absorb another 300 youths for the next batch of training. 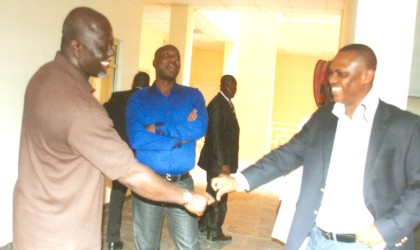