This follows the signing into Law, of the bill, Rivers State University of Education Law No.8 of 2009 by Governor Amaechi at Government House, Port Harcourt, yesterday.

Already Governor Amaechi has announced the name of the; pioneer Acting Vice Chancellor of the State University of Education, Port Harcourt.

She is Professor Ogulu Green who until this appointment was the Provost of the State College of Education.

Governor Amaechi, who announced this yesterday at the signing ceremony of four bills passed by the Rivers State House of Assembly into Law, said the move was to enable government commence the immediate implementation of the four bills, including the transformation of the State College of Education to the University of Education.

The bills, “Rivers State Public, Private Participation in Infrastructural Development Law No.5 of 2009; Rivers State Road Traffic Law No.6 of 2009; Rivers State Contributory Pensions Law in the Public Service No.7 of 2009 and the Rivers State University of Education Law No.8 of 2009”, the governor said, were cardinal to the growth and maintenance of law and order in the state.

He thanked the Speaker and Members of the State House of Assembly for according the bills accelerated hearing, assuring that the state government would reciprocate this gesture by commencing an immediate implementation of the laws.

In keeping with this, Governor Amaechi said the management committee for the State Road Traffic Authority would be constituted· soon, while efforts are being made to address strategic issues in the remaining Laws before implementation. 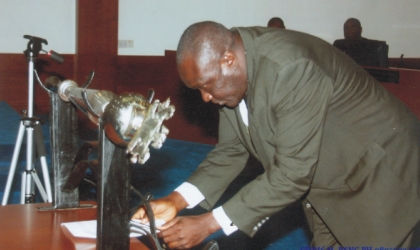