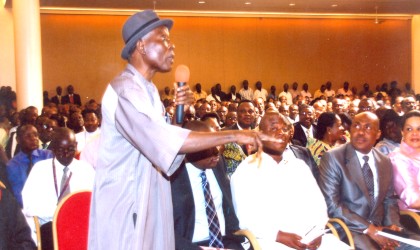 The Presidency has asked politicians in the country to emulate the leadership qualities of the nations founding fathers.

The President who was represented by the Secretary to the Government of the Federation, Alhaji Yayale Ahmed said that it is sad that since the demise of Ahmadu Bello and the other politicians of his era, the country has not been able to reproduce the kind of selfless service and quality leadership offered by the late Sardauna

The President said that the  objectives of the foundation include among others, to carry out research on the life and legacies of the late Sardauna, particularly in the areas of values in service ,leadership, development strategies, education, religious and ethnic tolerance, transparency and accountability towards immortalizing the late icon.

Chairman of the Northern Governors Forum and Governor of Niger state, Dr. Muazu Babangida Aliyu said many glowing tributes would be paid to the memories of Sir Ahmadu Bello at the event which was natural, especially for a man who lived an exemplary life entirely devoted to the service of humanity and worship of his creator.

He said from the varied testimonies of his peers and contemporaries, it would not be an exaggeration to say that it was impossible to exhaustively describe or discuss the towering personality of the late Sardauna in a day.

However, he added, the Northern Governors Forum had recognized that if they must make a difference as political leaders of this generation, they had a covenant with history and posterity, and that if they desired to make their states and nation much better place, then they must continue to emulate people like the Sardauna and appreciate the sacrifices made by past leaders.

About N5.5 billion was realized at the launching of Sir Ahmadu Bello Memorial Foundation N20 billion appeal fund with the Kano based business tycoon, Alhaji Aminu Dantata, who was the chief launcher donating N250 million.

The chief launcher, who opened the floodgate of donations, also announced the N150 million donation of his nephew Alhaji Aliko Dangote, who was the second highest individual donor. A total of N779,480,000 were realized from Kano state alone, as announced by Dantata.

Earlier before announcing the donations, Alhaji Aminu Dantata advised that the foundation should be entrusted in the hands of people with track records who have no political leanings. He also counseled  that the proceeds should be channeled towards benefiting the society.

Other states of the north also donated to the foundation with Kaduna State donating N250 million and 100 hectares of land for the building of the foundation, Sokoto State, Niger State, Taraba State, Adamawa donated N250 million each while Yobe state gave N210 million.