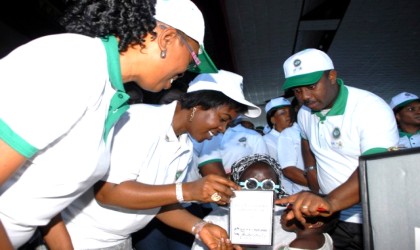 The authorities in Abuja have uncovered a fresh plan aimed at relegating the Vice President, Dr Goodluck Jonathan in the power caucus in 2011.

The bid to undermine Dr Jonathan is said to be spearheaded by a former South South governor.

Besides, the plot has the support of  two other incumbent South South governors, whose activities had ensured a somewhat strained relationship between President Umaru Yar’Adua and the Vice President.

Though the Vice President is said to have taken all developments with equanimity, it was gathered that those plotting against him are unrelenting, while also flaunting their perceived closeness to President Yar’Adua.

While the former governor is said to have all his imprints over the Presidential Villa, the incumbent governors are said to be doing everything possible to win the President to their sides.

Only recently, the President and the Vice President were said to have clashed over the bid by Yar’Adua to please one of the incumbent governors in the appointment of members of the board of the Niger Delta Development Commission (NDDC).

While the President and his number two man were said to have agreed initially on the choice of a particular candidate, the governor was said to have sent in the name of another candidate to replace the original candidate.

As the President made to present the name of the governor’s candidate, the Vice President was said to have flared up, saying that his boss was trying to allow them run his state and as well undermine him (the Vice President) in his own office.

The Vice President was later pacified when his boss decided to stick to the name they had earlier agreed to. But investigations revealed that the former governor, who is involved in the plot against Jonathan has vowed that his support for Yar’Adua’s second term bid would be based on his having an input into who becomes the Vice President.

Sources said that the belief in the camp of the former governor and the incumbents is that Jonathan emerged without consultations from former President Olusegun Obasanjo and that he should be shown that the power base in the country had changed.

Also, one of the incumbent governors is said to be fighting the Vice President because of his belief that the man would not support his second term ambition.

In the governor’s camp, there is the belief that the Vice President was planning to back a serving Senator for the governorship position in 2011.

The second incumbent governor is said to be playing along the card of his godfather, who had since become the main powerbroker in the country.

Sources confirmed at the weekend that while the Vice president had been striving daily to maintain his loyalty to his boss, his traducers were ringing it in the ears of the President that they hold the key to his second term ambition.

“On many occasions, the President had listened to the acclaimed godfather and even one of the governors only to realize that the advice they have given were not that altruistic. In that case, he would reverse the decision he had taken in respect of the advice, but some that cannot be reversed, we are made to live with,” said a source close to the Presidency.

It was gathered that the acclaimed godfather had insisted on having the key to resolving the Niger Delta problem but when the advice he gave kept leading to further eruptions in the region, the President had to call his deputy and they put heads together to come up with the amnesty programme.

But a source further added that the forces seeking to demystify Jonathan again moved with the staging of the post amnesty conference which was held last week.

The Vice President was not made to play any significant role in the programme, despite being the current leader of the Niger Delta and the Highest political office holder from the zone in government.