Ghana’s Under-20 team, the Satellites, yesterday in Egypt emerged champions of the World Youth Championship (WYC) to end Africa’s 30 years quest for the title.

The Ghanaians defeated Brazil 4-3 in a dramatic shootout after regulation and extra time failed to separate the two sides.

It was indeed a happy end to a final that earlier in the game looked to be another heart break for Ghana in particular and Africa in general.

Having reached the finals of the championship on four occasions, Ghana twice, and Nigeria twice, most Africans looked unto their continental flagbearers to end the fruitless search for the title of a competition that began in the continent (Tunisia) in 1979.

But the opening minutes saw the eternal football favourite, Brazil, dominate the game and blow Ghana away in the match.

When the centre referee issued a harsh red card to Ghana’s central defender, Addo midway in the first half, it seemed as if the Brazilians had been given a helping hand to steamroll the Africans.

However, the Ghanaians under the inspirational leadership of Captain Dede Ayew and inspired goalkeeping from Keeper Agyei, took everything that the South Americans threw at them.

They defended stoutly, fending off waves of Brazilian attacks and tried to threaten at the other and occasionally.

As Brazil failed to put away some of the begging chances that came their way, mostly due to poor finishing and impressive goalkeeping by Agyiei, Ghana force the game to extra time.

Despite obvious fatigue, the extra time was a ding-dong affair and Brazil failed to take advantage of their numerical advantage.

Ghana weathered the storm and dragged the final to penalty shootout.

The drama of the final really reached crescendo in the shootout. Ghana came within a kick of losing to Brazil for the third time in the championship when they failed to convert their third and fourth kicks.

With the final and trouphy there to be won Brazil with the fifth kick, the Brazilian player ballooned the ball to hand Ghana a life line.

Brazil also lost their sixth kick taken by Teixierra while Badu converted to avenge previous losses to the South Americans and make Ghana the first African side to win the title.

Most observers are already describing the victory as a good omen for the continent is this period that Africa is hosting all FIFA’s World Cup competitions.

The feeling is that the triumph can rob off on the continent to make more history  during the FIFA Under-17 and Senior World Cup to be held in Nigeria and South Africa, respectively. 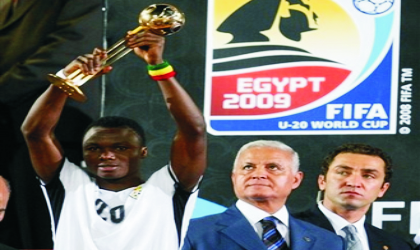 Ghana's Dominic Adiyiah raises the trophy of the U-20 World Cup at the Cairo International Stadium, Cairo, yesterday. Ghana beat Brazil 4-3 in penalties after the match finished 0-0.