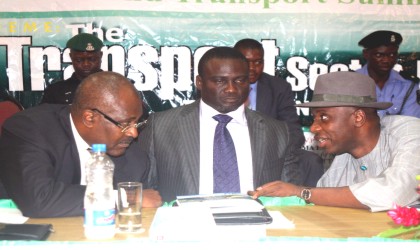 Former Vice President, Alhaji Atiku Abubakar is among prominent Nigerians named Wednesday by the Central Bank of Nigeria as leading debtors to the troubled banks being probed by the apex institution. Others are Peter Ololo, Femi Otedola, Aliko Dangote, Jimoh Ibrahim, and Michael Oyewole and their companies are among the prominent names in the new list of bank debtors released by the Central Bank of Nigeria (CBN).

Former Vice-President Atiku Abubakar, was  named among the debtors to Spring Bank. He is said to be owing the bank over N101 million.

The total amount owed by the debtors to the four troubled banks identified by the CBN, in the second audit of 14 banks, is in excess of N348billion. The CBN classified the loans as nonperforming. The troubled banks are: BankPHB, Springbank, Equitorial Trust Bank and Unity Bank

However, the N348billion excludes debts owed to Wema Bank Plc. The CBN did not list the total amount of loans owed to the bank on its website. Wema Bank was given until the end of June, next year to recapitalise.

According to the CBN’s classification, the monies were given to the individuals and corporate organizations in the form of loans, overdrafts, term loans, margin loans and through a whole host of other facilities.

The release of the debtors’ list is in conformity with the promise by Sanusi Lamido Sanusi, the CBN governor at the just concluded World Bank/IMF Meeting in Instanbul, Turkey, that he would release the names of the debtors and that there would be no sacred cows.

The total amount owed also confirms Mr Sanusi’s statement that the first five banks – Intercontinental Bank, Afribank, Union Bank, Oceanic International Bank and Finbank were the most troubled of all the 24 Nigeria Banks, with a total debts exposure in excess of N747billion. Mr. Sanusi fired the chief executives of those banks on August 14, shortly after the CBN concluded a stress audit on them.

The Igbinedion University, Ekene Dili Chukwu Ltd, Bayelsa State government, Wema Asset Management Limited, Transnational Corporation Plc, and Odua Investment, are also on the list.The Central Bank said that the release of the new list is a continuation of its banking industry cleansing efforts. “In furtherance of the efforts of the Central Bank of Nigeria (CBN) to assist the banks affected by the outcome of the recent CBN/NDIC Special Examination, we publish herewith the list of non-performing loans of N100m and above for Bank PHB, Spring Bank, Unity Bank, Wema Bank and Equitorial Trust Bank as at June 30, 2009”

Mohammed Abdullahi, the spokesperson for the CBN, said: “The CBN will help all the five new banks with capital adequacy issues in their loan recovery efforts, just as it did with the last five. This is because it is the nonperforming loans in all the affected banks that put their capital at risk. CBN will remain consistent and fair in its stance on banks that are in similar situations.”

According to the regulatory body, publishing the names of bank debtors is now necessary. “Following the recent regulatory action of the Central Bank of Nigeria on the five (5) banks, it has become necessary to use this medium to request the following defaulting customers of the affected banks to pay without further delay their indebtedness, failing which the banks will take all appropriate legal actions to ensure repayment. These are the largest debtors and the CBN will continue to publish the list of defaulters on an on-going basis,” the statement stated.

The Economic and Financial Crimes commission has began prosecuting the five Chief Executives that were sacked by Mr. Sanusi in August. Some are out on bail while others remain in custody following their failure to meet bail conditions. It is expected that the EFCC will also closely examine the records of the last batch of CEO’s sacked by Mr. Sanusi. In total, nine chief executives have been sacked after an audit of all of Nigeria’s 24 financial institutions. Due to the banks’ illiquidity and under-capitalisation, the Central Bank has had to issue nearly $4 billion to bailout the nine affected banks.